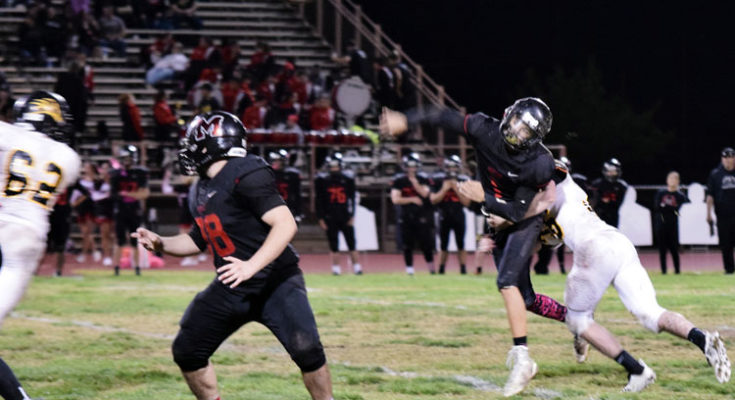 Raymundo Frasquillo Photo/Gila Herald: Junior quarterback Brandon Blair unleashes a pass after running game was contained. Morenci offense was kept out of the end zone as the No. 3-ranked Wildcats were handed a 30-2 region home loss by No. 5 Round Valley on Oct. 12.

MORENCI – An offensive explosion in the third quarter punctuated by big plays and accompanied with a lock-down defense propelled Round Valley (5-0 conference, 7-1 overall) over host Morenci (5-2 conference, 6-2 overall) on Friday night, 30-2.

“We figured it out but it was just a little bit too late and ended up short on the scoreboard,” said Morenci head coach David Gallegos. “We’ll bounce back Monday ready to work and prepare for Pima.”

Round Valley quarterback Kason Woolf owned the night with three rushing touchdowns of 26, 46, and 60 yards.

The Elks opened up the scoring with a 31-yard field goal by Sergio Camunez on their opening drive after being set up in good field position by a 32-yard pass from Woolf to L.J. Foster to the 21-yard line.

The wet weather may have affected the Wildcats as quarterback Brandon Blair lost the handle on their first snap of the night. The fumble was recovered by the Elks.

Morenci stepped up on defense, however, and stalled the Elks’ drive. Camunez then came up just short on a 47-yard field goal attempt.

Morenci’s offense just wasn’t able to sustain a drive and punted after a 3-and-out. The Wildcats would punt the ball 10 times on the night and have two fumbles.

Big plays propelled the Elks’ offense and their initial touchdown was no different.

Woolf hit Foster for a 21-yard gain to bring the Elks to the 31-yard line. Two plays later, Woolf zipped in from 26 yards out untouched for the touchdown. The extra point was blocked by Christian Alva, but the Elks were up 9-0 early.

After a productive first quarter, Round Valley survived a horrendous second quarter that saw consecutive offensive series that ended with a safety, interception, and a punt.

A bright spot for Morenci was its punting, which pinned Round Valley inside its own 20-yard line repeatedly throughout the night.

Early in the second quarter, Round Valley’s Tayvin Bevell mishandled a snap on a punt attempt from inside his own end zone, and the Morenci defense smothered him for the safety for the team’s only score of the night.

The Wildcats’ defense stepped up again later in the quarter as Mark Roybal played a long Woolf pass excellently and came up with a beautiful interception. Then, near the end of the quarter, Woolf pitched the ball to Charles Holiday, who was stripped by Isaac Pacheco. Matt Garcia recovered the fumble for Morenci.

Still, the Elks took a 9-2 lead into halftime and must have eaten their Wheaties then because they came out in the third quarter like a team on a mission.

Three huge plays in the third quarter separated the Elks from the Wildcats.

On his first touch in the second half, Woolf zipped straight through the middle of the line 46-yards for a touchdown.

Then, on its very next possession, running back Mark Irigoyen went untouched 54 yards to paydirt to put the Elks up 23-2.

The scoring was capped on the Elks’ next possession as Woolf struck again, this time with a 60-yard scamper to the end zone to give Round Valley the victory, 30-2.

Morenci’s offense had flashes of plays that worked on the ground and through the air, but it just couldn’t sustain a drive and didn’t have any big plays go the distance like Round Valley.

“We couldn’t get the ball going,” Gallegos said. “We threw the ball really well, which is surprising because we normally don’t throw the ball.”

“I’m super proud of our effort,” Gallegos said. “I think we can make a run (in the playoffs). It starts next Friday, and it’s a tough place to play in Pima. It starts there, and we’ll just work from there and, hopefully, get in the playoffs and make a run there. I know we have the toughest section in the state hands down. You’ll see all five of our teams there.”

The Eagles will fly up to Eager for the game of the year Friday, Oct. 19, as they take on the Elks for first place in the highly competitive 2A Black Region. The winner of the game will most certainly take the region and likely will be seeded number one overall come playoff time. The Eagles hope the win propels them forward on their quest for a third straight 2A State Championship.

The Safford Bulldogs notched their fifth win in a row, easily routing the Tanque Verde Hawks, 42-0, on Thursday night.

The Bulldogs will travel to Tucson to face the Pusch Ridge Lions (3-2 conference, 4-4 overall) on Friday, Oct. 19, starting at 7 p.m. That game and Safford’s final regular-season game Oct. 26 at home versus the Sabino Sabercats (5-0 conference, 6-2 overall) will likely determine its playoff hopes and seeding. The Sabercats beat the Lions, 23-7, Friday night.

The Duncan Wildkats (5-3 conference, 5-3 overall) destroyed the Baboquivari Warriors (2-6 conference, 2-6 overall) 70-26. The No. 11-ranked Wildkats hope to continue their win streak Friday, Oct. 19, as they travel to Arete Preparatory Academy to battle the No. 6-ranked Arete Prep Chargers in the opening game of the 1A State Playoffs. The game starts at 6 p.m.