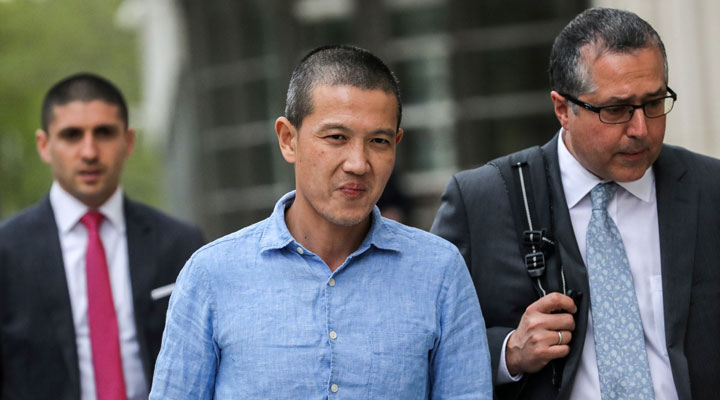 File Photo By Neenah Moon/Reuters: Ex Goldman Sachs banker Roger Ng and his attorney Marc Agnifilo leave court in New York in May 2019. Ng was recently convicted in a corruption case and faces up to 30 years in prison.

Recently, Jon Johnson, news director for the Gila Herald, alerted me to a television production company in London and Northern England that was seeking information on a story I composed last year, “The Great Dunbar Armored Depot Robbery” (June 17, 2021).

At the time, the 1997 robbery of a Los Angeles armored car facility was the largest all-cash heist in United States history.  Maybe, still is.  The six thieves successfully emptied Dunbar’s vault of nearly $20 million and fled in a rented U-Haul van.

A broken taillight lens was the only clue left at the scene.

The crime remained unsolved for several years until one of the perpetrators mistakenly failed to remove the original paper wrappers from several bundles of cash he was using to purchase real estate.

A suspicious realtor alerted authorities to the unusual transaction.  Police determined the person trying to buy real estate was the same person who rented the U-Haul the day of the robbery.

Eventually, arrests were made of all suspects and others assisting in laundering the money.  Reportedly, several million dollars remain unaccounted for.  The ring leader served 19 years at the Federal Correctional Institution in Safford, Arizona.

A local celebrity of sorts.

Now, comes news of another big-money scam hundreds of times larger than the Dunbar caper.

In the fast-moving money world of Wall Street, it’s not unusual to occasionally uncover financial crimes of immense proportions.  Millions and billions of dollars can be involved over a period of a few years.  The complexity of the offenses, usually involving upper echelon management employees familiar with a company’s business practices and computer systems, has led to increasingly more expensive transgressions.

According to recent news releases, a colossal embezzlement scheme involving several managers of banking and investment firm Goldman Sachs has been implicated in a 2009-2014, $4.5 billion scandal to plunder a Malaysian investment fund called 1MDB.

Perhaps, an acronym for “One Malaysian Doing Business.”

Coincidentally, some of the ill-gotten loot helped finance Martin Scorsese’s 2013 film “The Wolf of Wall Street,” which seems more than ironic.

The fraud revolved around the sale of $6.5 billion in bonds Goldman helped 1MDB raise.  In the process, Ng and other Goldman associates, siphoned about two-thirds of the pot for themselves, through bribes and kickbacks — a form of payment by coercion or a previous agreement.

To date, Ng is the only Goldman banker to stand trial, making it appear he’s the one taking the blame for other co-conspirators.  A point of contention defense attorneys made known to the jury.

One of the suspects, Tim Leissner, was an important government witness.  Like Ng, Leissner – also a Goldman employee – was touted as cooperating with the prosecution in return for a plea of leniency in his upcoming criminal case.

Ng’s attorney noted the crime is “perhaps the single largest heist in the history of the world.  Roger (Ng) is basically the fall guy for this whole thing.  And Tim Leissner is looking to close the biggest deal of his life.  [He] never stopped lying ever, and he didn’t stop lying in this courtroom.”

Leissner testified on the witness stand he and Ng used several methods to move/launder the money, including offshore accounts and shell companies.  The typical procedure in these kinds of criminal activities.  Culprits in the previous Dunbar robbery applied similar strategies.

Apparently, Ng was paid peanuts in comparison to others involved.  The defense argued some of the $35 million he received from Leissner was legitimate proceeds from lawful business transactions by their wives.

Sounds a little fishy, but I guess $35 million compared to $4.5 billion is worth arguing over.  Ng felt his slice of the pie wasn’t commensurate to everyone else’s.

Sometimes, even the most honest crook can’t be trusted to fairly divide the booty.

Leissner may be next to face a federal prosecutor.  Ng’s attorney has already established Leissner’s credibility problems when he brought up his record of falsely disclosing his marital history.

Tim must be an exceptionally smooth-talker to be involved in so many nefarious schemes.

Steadfastly maintaining his innocence, Low Taek Jho – a name sounding like a contemporary smear for a less-than-savvy computer dude – is more into the high-steppin’ social scene.  His 2012 Las Vegas 31st birthday bash was attended by numerous Hollywood celebrities, including Leonardo DiCaprio, Kim Kardashian, and others associated with the entertainment industry.

Many of these super money crimes seem to have a common theme; regardless of the intensive planning and implementation, eventually, they are exposed because of some simple, unimagined slip-up.

In the Dunbar robbery, it was a bandit’s failure to remove an incriminating ordinary paper money wrapper.  Obviously, something the criminals had done many times before.

The Malaysian fund collapse, though larger in monetary value and operational finesse, was equally susceptible to being found out because of outright greed.  Not content with stealing a few million dollars, the crooks decided it would take billions to satisfy their cravings.

Eventually, reality overcomes fanciful dreams.  Unfortunately, the damage done by these types of crimes can never be fully repaired, regardless of the length of prison sentences and fines handed down to a few instigators.

Still, the Goldman Sachs financial scandal pales in comparison to the 30 trillion dollars of debt our own government has dumped on us.  For some inexplicable reason, no one is ever prosecuted for this enormous travesty.

After years of continually repeating, and getting away with this outrageous behavior, a person has to surmise the really clever outlaws don’t go to the trouble of devising complex plots to steal money – they simply borrow or use government presses to print it, leaving all of us holding the bag.

In some circles, such chicanery might be considered counterfeiting.  But, when the federal government does it, clever politicians eloquently assure us it’s necessary so Washington can pay its overdue bills – and, more importantly, their paychecks will continue to arrive on time.

Let me if I’ve got this straight.  In order for our masters in the nation’s Capitol to keep the lights on and toilets flushing, they simply borrow or print a few more trillion dollars.

Brilliant!  What could possibly go wrong with such a buffoonish plan?