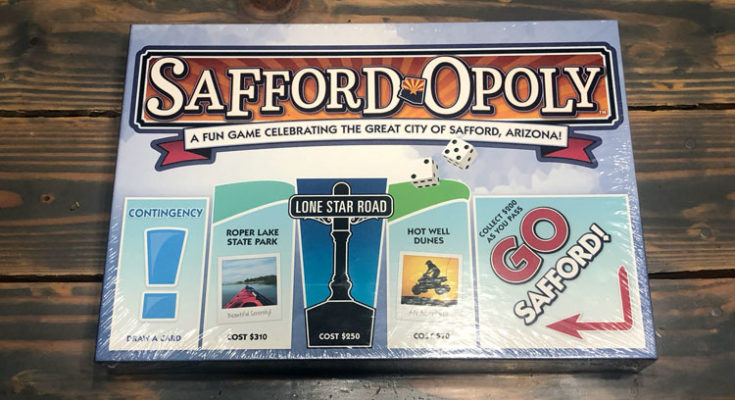 Jon Johnson Photo/Gila Herald: Safford-opoly is exactly what it sounds like, and it’s a hoot.

SAFFORD – So, a while back I received the board game Safford-opoly from maker Late for the Sky out of Ohio to give it a whirl and perhaps write up a review.

According to the company’s media point person, Jessica Staub, the company has been making “custom -opoly games in Cincinnati, Ohio, since 1984.” And “all of our games are designed and manufactured in-house, and are based on fun themes like animals, cities, colleges, bacon, zombies, and more!”

Now, I have a Simpsons version of Monopoly, and I don’t know if I should mention that name here or not, but, come on, we all know the inspiration for this game even if it just uses the -opoly part.

Unboxing, the game appears to be quality made and worth the $19.95 it currently sells for in our local Walmart. Curiously though, the one they sent me had two hand figures with the game pieces and was missing the smiley face.

Nonetheless, after days of asking to play it by some of my children, I finally relented and we sat down Monday night after dinner for a game night. It was already pretty late (8:30-ish) to start a game with my 13-year-old and 8-year-old daughters since they both have swim team practice in the morning and I seemed to forget how long a game involving -opoly could last. My wife, however, knew all too well and said in passing that we would be up all night. I don’t know why I still don’t pay attention to what she says all the time because she is always right. Well, almost always.

We dove in enthusiastically anyway and actually had a great time acquiring the various locations. I took glee in quickly getting the Safford Police Department and Fire Department properties, while my 13-year-old daughter, Ambrosia, quickly snagged up two roads (Safford-opoly’s equivalent of railroads) and both Downtown Safford and City Hall, which are the equivalent to Park Place and Boardwalk.

The game is everything you think it is, just with the Safford bent, including the “Big Fun” and “Contingency” cards which take place of the “Community Chest” and “Chance” cards from Monopoly, and getting stuck in a traffic jam to lose a turn rather than put in jail.

While my 8-year-old, Avalon, kept coming up on the short end of the stick on the cards, I found myself pretty lucky, winning the Salsafest, being crowned Ms. Safford, and whatnot. It wasn’t until later when I had amassed a real estate empire when I drew the dreaded Luxury Tax card and had to pony up quite a bit of cash.

Also, I’ll admit, I had to lose a turn after learning I ate too many Tiki Tacos at Casa Mañana. It’s amazing how life imitates art and vice versa.

My strategy was to buy up everything I could as quickly as I could and as we entered the second hour of gameplay I began to reap the rewards as I got my first couple sets of properties and put some “City Blocks” down on them to increase the rent. Eventually, I outfitted them with “Keys to the City”, the game’s version of hotels, and really racked up the cash.

Ambrosia followed suit with her two main luxury properties, but I managed to carve out a corridor in the midtown-level that stretched through an entire side and a half of the board from Relation Street all the way to the Gila River card. That length of properties worked wonders, and soon after I bankrupted Avalon and took over her holdings as well.

Then I turned my attention to Ambrosia, whose hopes were dashed after she had to mortgage her prize properties to pay her rental bill for staying at the Mt. Graham Golf Course.

After that, I greedily swallowed up more properties even though the end result was inevitable, and just before the third hour was up, she succumbed, leaving only one with a true monopoly . . . ahem . . . Safford-opoly.

So, if you like the game Monopoly, you’ll enjoy Safford-opoly. We got a kick out of it being localized for Safford, which made the game that much more fun for us. Once again, you can pick up your own copy at Walmart for just $19.98.

While putting the game away, Avalon came up with sleepy eyes and asked, “Can we play again tomorrow, dad?”