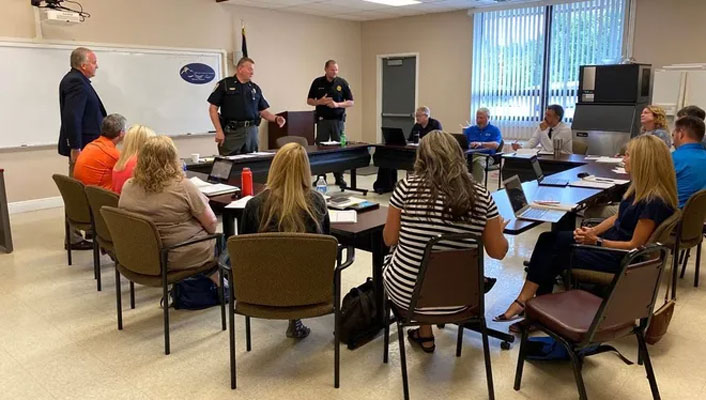 In sort of reverse thinking, some North Carolina schools are hoping to beat a possible future shooter to the punch – by equipping themselves with their own AR-15 semi-automatic rifles.

This is sure to set off the woke “gun-free zone” crowd – a twisted philosophy that often turns calm, nonviolent environments into shooting galleries by those seeking to do harm.

Schools, churches, sporting events, and shopping malls are primary targets of these homicidal maniacs attempting to kill or injure as many people as possible in a short period of time.

Seems reading, writing, arithmetic, and cell phones have been joined by an additional subject to the curriculum in the Madison County School District.

However, students will not be taught or trained in the proper use of AR-15 firearms.  Nor, will teachers or other staff be responsible, should the need arise.

In an innovative response to failed law enforcement efforts in the Uvalde, Texas school shooting in May in which 21 people were murdered, Madison County Sheriff Buddy Harwood, has obtained permission from county officials to place at least one AR-15 rifle in each of the six schools located within the county.

According to a report in The Ashville Citizen-Times, Aug. 5, 2022, Sheriff Harwood declared, “We were able to put an AR-15 rifle and safe in all of our schools in the county.”

Continuing, the sheriff also noted, “We’ve got breaching tools to go into those safes.  We’ve got extra magazines with ammo in those safes.”

The unbelievable collapse of police “active shooter” policies, discipline degradation, and incompetent command decisions at Uvalde were the primary reasons Sheriff Harwood cited for having semi-automatic rifles and breaching tools already in place, rather than wasting precious time waiting for those instruments to arrive.

Even though the shooter at Uvalde was originally approached by a few armed law enforcement personnel within minutes of his entering the school, it took an hour and 17 minutes before the killer was terminated.  By the time the incident was over, hundreds of cops had responded to the tragedy.

Incredibly, 376 police officers were eventually on the scene to take out a single shooter, surrounded in a ground-floor classroom, behind an unlocked door.

Why?  Why did it take so long to eliminate the threat?  Children and teachers were being shot to death as cops dilly-dallied deciding what to do and when to do it.

With so many law enforcement people and guns on the property, coupled with botched leadership, it’s a miracle they didn’t shoot each other.

Obviously, as the Texas State Legislature later observed there, “were systemic failures and egregious poor decision making” on virtually every level of law enforcement at Uvalde.

“Those officers were in that building for so long,” Harwood said, “and that suspect was able to infiltrate that building and injure and kill so many kids.”

As a precautionary effort, the sheriff remarked, “I do not want to have to run back out to the car to grab an AR, because that’s time lost.  Hopefully, we’ll never need it, but I want my guys to be as prepared as prepared can be.”

If there is a silver lining in the Uvalde story, state and community police authorities may be compelled to reevaluate their training and tactics involving a shooting and barricaded suspect or suspects.

A universal rule of procedure should be firmly implanted into the psyche of every first responder involved in these situations:  Wasted time is the enemy of success.

It might mean the difference between life and death.