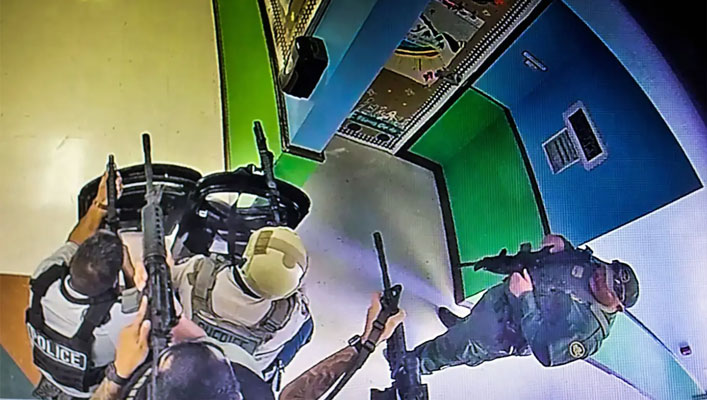 Screengrab via Robb Elementary School surveillance video: Officers are shown on video aiming rifles and waiting outside the classroom for more than 45 minutes as Salvador Ramos executed children inside.

I’m sure there will be blatant objections to my views on the Uvalde, Texas school massacre.  I’m also positive gun control advocates will voice equally loud disapprovals.

Readers are entitled to believe whatever they wish on either subject.  It’s not my intention to persuade or change their perceptions.  I doubt if I could, anyway.

Uvalde was an obvious display of what can happen when agencies of government completely fall down on their duties and responsibilities.  In this particular case, the incompetency proved deadly – 21 times.

“What do you know, Mike, you’re not a cop?”  True, but I do know police officers are entrusted, “To serve and protect.”  The motto is often seen on their vehicles.

It does not say, “To serve and protect when we have sufficient backup.”

The shooter at the Uvalde school was an 18-year-old teen acting alone.  The fact he may have had body armor and an M-15 semi-automatic rifle is of secondary importance to the police’s mission.

It matters less the age of the shooter or the weapon he uses.  His actions are the primary relevant thing applicable to the situation.

With a classroom full of children, and a crazed killer inside, cops who arrived first on the scene had the absolute obligation to try to take out the shooter.  Even if all they had were their side arms.

This was a close encounter, requiring seconds to react.  There wasn’t time to hesitate or wait for the arrival of more powerful weapons or special tactical teams.

A crazy man was trapped, firing at and murdering innocent individuals.  The very least the cops should have done is return fire.  They might not have killed him, but provided a distraction that probably would have saved lives.  He may have surrendered at this point.

An hour’s delay is inexcusable.  What rationalization or training program instructs an officer on the scene of an active shooter to restrain immediate countermeasures?  If there is some kind of police policy not to use deadly force when dealing with an armed lunatic, then why do cops carry and train with pistols?

There’s a much-overused truism that, “It takes a good guy with a gun to stop a bad guy with a gun.”  The Uvalde incident was a perfect example of this adage in real-time.

Initially, it was reported after the gunman wrecked his pickup truck, he fired at a couple of individuals, entered the school through an unlocked door, and locked himself inside with the teachers and students.

Were there windows in the classroom, allowing police to see in?

Police later insisted they tried to open the doors, but couldn’t.  Valuable time was slipping away.

Evidence is beginning to surface that maybe this is not actually how it happened.  The San Antonio News, June 18, 2022, is suggesting video footage is showing the door locks were not locked and the shooter did not actually lock them.

The doors were supposed to lock automatically when the door is closed and could only be opened with a key.  For some inexplicable reason, the locks were not working or malfunctioned that day, allowing the shooter unencumbered entry.

As a result, the doors were unlocked for the entire 77 minutes from the time the shooter entered the classrooms until police shot and killed him.

At least three unanswered questions immediately come to mind: Did the shooter, a local resident of Uvalde, know the locks were not functional, permitting easy entry?  Why did the police insist they used the school’s door keys trying to open the door?  And, why didn’t the police simply bust through the door, they had the tools available to do so?

By this time, there were dozens of cops on the scene from various law enforcement agencies.  Yet, the shooter continued to kill at random.

There are also reports the situation was even more disturbing.  Allegedly, the school district police were trying to open the wrong classroom door.

How is that possible?  With all the gunfire taking place within the classroom, couldn’t the police distinguish which room it was?  This is not a large public school.

There was, obviously, a total breakdown in police training protocols and command decisions.

Which brings me back to my original assertion, why didn’t the first two or three police officers arriving on the scene begin returning fire?  It may not have completely stopped the carnage, but it probably would have diverted the shooter’s attention.

Rep. Joaquin Castro, TX-D, is wondering the same thing.  “I’m shocked, like the rest of the country, at the incompetence and dereliction of duty by multiple law enforcement agencies who failed to save those kids.  I’m also increasingly disturbed by what looks like an attempt to cover up the truth by state officials and the local police department who have refused to comply with requests to release information to the public,” he told the San Antonio News.

As mentioned, I have never received any police training, but I did spend a few years in the Marine Corps.  I was taught the first thing you do when coming under fire, particularly from small arms, is to locate the position and return fire as soon as possible.  Eliminate the threat.

Fire departments do not wait to respond to a fire, they begin rolling when the alarm is sounded.

Medics and ambulance units do the same.

First Responders are well aware time is critical in these emergency situations.  They already have a general idea of what to do when they get there – the finer details are resolved on the scene.

What could have been the rationale for the Uvalde Police Department, and other agencies, to hesitate as long as they did?

The only reason I can think of is they were panicked and confused.  By the time they realized their mistakes, it was too late.

UPDATE:  Appearing before the Texas Senate, on June 21, 2022, Texas Department of Public Safety Director, Steven McCraw, reported, “There is compelling evidence that the law enforcement response to the attack at Robb Elementary School was an abject failure and antithetical to everything we’ve learned.”

McCraw continued, “Three minutes after the gunman entered the west building, there was a sufficient number of armed officers wearing body armor to isolate, distract and neutralize the subject.”

Concluding, the Public Safety Director said, “The only thing stopping a hallway of dedicated officers from entering Room 111, and 112, was the on-scene commander, who decided to place the lives of officers before the lives of children.”

McCraw also noted there were no locked doors preventing police entry, as previously reported.  Apparently, the shooter didn’t have a key and he couldn’t have locked the door from the inside.

In my opinion, this situation has gone from bad to worse.  Original incident reports were far from accurate or even factual.

Someone has some explaining to do.