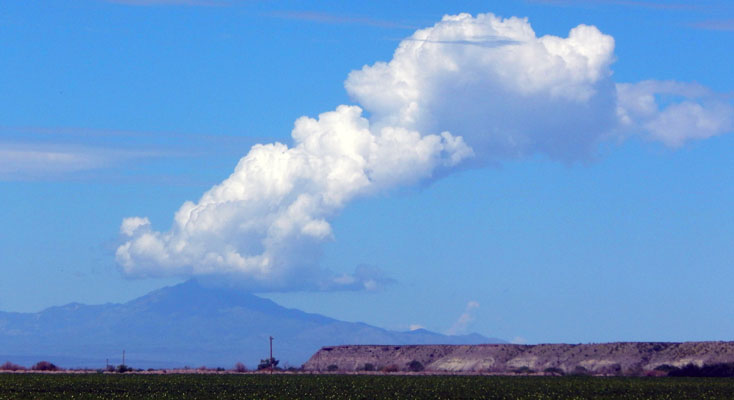 Photo By Mike Bibb: A cloud forms a pillar over Mount Turnbull.

While not anticipating the excitement and calamity of a Mount St. Helens eruption in Washington state on May 18, 1980, Mount Turnbull on the San Carlos Indian Reservation in Southeast Arizona appeared – for a brief time – to have mimicked the famous Cascade Range volcano.

Thanks to an unusual cloud formation.

Monsoon season brings – in addition to sporadic rains – a plethora of unusual cloud designs.  Often, shapes of animals, birds, cartoonish faces, and just about every other image imaginable can be seen if only a person takes the time to look skyward.

I happened to be out and about one morning when I noticed a uniquely fashioned cloud positioned directly above Mount Turnbull.  My immediate response was it looked very similar to a drifting smoke and gas plume of an erupting volcano.

Since I didn’t live around here the last time volcanoes were going-off, I can only guess what it must have been like.  People and pets were probably scurrying in all directions, seeking safety and fresh air.

There was no CNN or Fox News to keep us informed of the sudden climate change disaster or a border wall holding back others fleeing exploding mountains in their own economically repressed communities.

Certainly, no highly educated and trained seismologists to alert us of increasing earthquake activity preceding a big magma and mudslide.

Actually, I’m not really sure there was a Gila River in those days a person could jump into to cool down from the radiated heat of a Mount Turnbull volcanic blast.

An old squirrel-powered evaporative swamp cooler probably wouldn’t have helped much, either.

Funny, the things you can think of just by looking at a cloud.