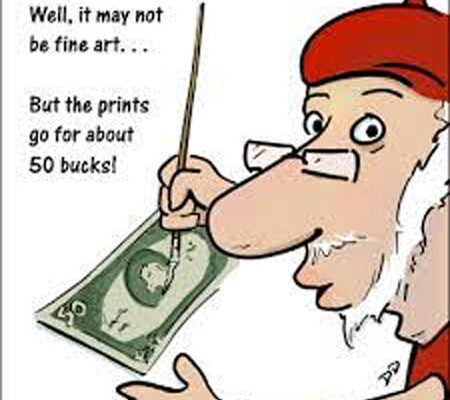 A local news story involving counterfeit money and a couple of less-than-brilliant yahoos was simply too good to ignore.  To refer to the incident as being a near-perfect example of a “world’s dumbest criminal” caper is an insult to dumb criminals.

A Safford duo trying to pass a fake hundred-dollar bill – twice, at the same store – goes beyond dumb.  How about “unbelievably stupid,” since that’s exactly what it was?

Ordinarily, if someone is planning on using “funny money” to purchase goods and services, they should at least make a half-hearted attempt by using a replica that actually resembles a U.S. $100 note.

Not something that looks like it was made in China.

Reportedly, a man and woman unsuccessfully tried the ruse but were quickly caught in the act.  First, the man attempted to pay for some items with the fake bill, but when a clerk pointed out the money was obviously phony, the guy exited the establishment, taking the bogus bill with him.

A short time later a woman tried the same scam with the same imitation bill.  As before, the clerk patiently explained to the would-be accomplice that the $100 bill was not a real $100 bill and the discrepancy was easily recognizable.

Mumbling something about the money being fake, she clutched the bill and walked out of the store.

How did the clerk instantly know the note wasn’t legitimate?  Simple, the reverse side of the bill was printed in Chinese or another Asian language.

Now, I’m no authority on the unlawful ramifications of attempting to use counterfeit money or all the legal allegations that could be brought against a suspect or suspects.  That’s for a United States criminal attorney to figure out.

My concern might be is it really counterfeit money if only half the bill is printed in English, while the other half is in a foreign language?  Is it conceivable a professional counterfeiter would put in the time and effort to fabricate bogus money and not realize his glaring mistake? More importantly, what would be the purpose of counterfeiting a bill of any denomination in two different languages?

However, what does appear to be a possibility is that the two suspects who tried to pass the bill were too ignorant to realize they may have obtained the fake currency from some kind of board or gambling game.  It may have actually looked real to them, so they thought they’d try to spend it.

But is it counterfeit?  I’m not so sure.

Who knows?  Possibly, China is now printing our money, along with everything else at Walmart and Dollar General.

Maybe it’s some kind of currency only diplomats and industrial tycoons with dual American and Chinese citizenships carry in their pockets?  Never know when they’ll have to tip the baggage-handlers at Sky Harbor Airport or Bejing, People’s Republic of China.

Or, could the two paper-hangers actually rationalize if the U.S. Treasury can print unlimited amounts of the green stuff, then why shouldn’t a private citizen do the same thing?

Now, if they were trying to pass some fictitious BitCoins, that would really be interesting.  Then again, I’m not sure how many people actually know what a BItCoin is – mistaking it for a common token at any carnival ride.

Here’s a hint – it’s way worth more than a Twist with Sprinkles – including a cherry on top!