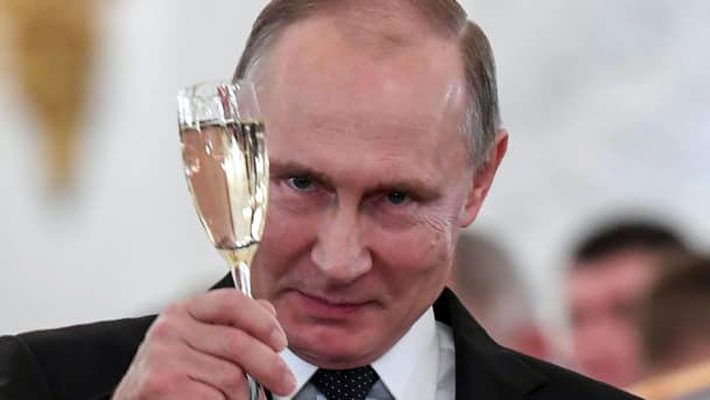 This certainly gives a new definition to “red state.”

A Senate report on Russia’s pro-Donald Trump disinformation campaign reveals something so vast that its tentacles reached into places where, seemingly, no slimy caress was necessary.

That was just one parcel in a stunning social media tour de force whose influence spread from sea to shining sea.

We speak of the Russian spawn called the Russian Internet Agency. The Senate report details how the troll factory set out, even before Donald Trump was nominated, to make him our president.

No small enterprise: Try more than a thousand employees and a budget of $25 million.

The Senate report details efforts aimed at encouraging Trump supporters to vote through a vast array of social media schemes, while discouraging and disillusioning others, particularly black voters.

This included calculated posts to make voters think twice about supporting Trump’s opponents, or voting at all. African-Americans were a key target.

Whatever the cause, Trump had this to say about that about black voters:

So, how did the trolls help? They created dozens of presumptively African-American websites and populated them with messages to encourage black voters to stay away from the polls.

Meanwhile, says the Senate report, the Russians provided online messaging aimed at motivating progressives to vote for the third-party mirage that was Jill Stein. The trolls did not miss a trick.

Just as important were the 20 million Gen X, Y and Z users of Instagram it reached, according to the report. We’ll never know to what extent guileful geopolitical players got young Americans to “vote for nobody” with messaging meant to tie their brains in knots.

For those who might think the Russians sided with Trump only after he became their vessel to challenge Clinton, the report points to efforts to others in the GOP primary.

A trademark meme of this effort was several posts identifying then-Trump rival for the GOP nod, Ted Cruz, as a “Trojan horse of the establishment.”

Oh, and the Russian trolls didn’t stop their efforts after Putin’s man was elected president. As soon as Robert Mueller set out to investigate Trump’s connections to the Mother Country, the Russian Internet Agency set out to use its means to discredit him.

This included bogus accounts that Mueller had ties to radical Islam (whoo, boy) and the Democratic Party, which is some because Mueller is a Republican.

Yes, this is what one calls actual, bona fide, certifiable fake news, as opposed to what Putin’s choice, the Electoral College king, deems it.

Back to the Russian trolls’ involvement in things Texan: It’s a little hard to figure out. As Texas Monthly’s R.G. Ratcliffe explains, apparently the Russians thought that Texas was in play in 2016. Not exactly. But with that budget, why not?

Regardless, the Russians mastered the language of Texas conservatives even before the 2016 campaign, with “Heart of Texas” calling for a ban on Muslim immigrants and ’ secession from the Land of Obama.

As to why Russia sided with Trump to such a degree, and vice versa, maybe Robert Mueller can help us understand.

Regardless, as Ratcliffe writes, the whole of the trolls’ effort was to “reinforce tribalism, to polarize and divide, and to normalize points of view strategically advantageous to the Russian government.”

To this let us say, “mission accomplished.” In Russian: “missiya .”