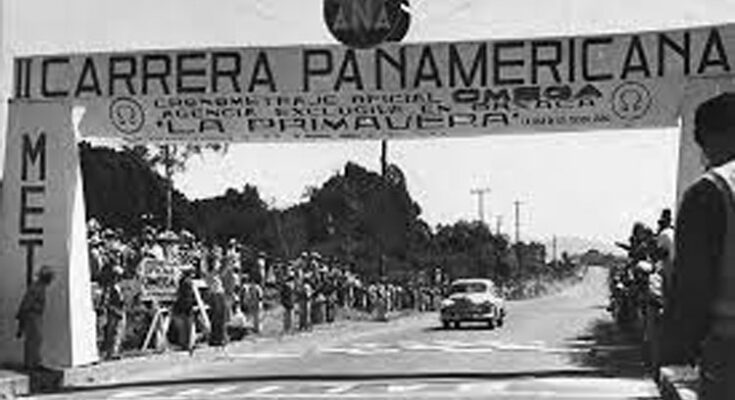 Being a frequent visitor to Mexico for many years – though not as often as I used to – I came across this little story about a Ferrari sportscar driver, broken down in the middle of nowhere, and was able to finish the race with the help of a local shade tree mechanic – including his accumulated experience, knowledge and a bar of soap.

Can’t actually verify its authenticity, author, or if the repair procedure was possible, but makes for interesting reading.  I attempted to research the article but wasn’t successful.

The races, however, were genuine.

The event supposedly took place during the 1950-54 era Pan-American Highway Race, a 2178-mile run from Ciudad Juarez in the north to Ciudad Cuauhtemoc in the south, along the Mexico-Guatemala border.

Subsequent races were reversed, starting in the south and finishing in Juarez.  Because the course became increasingly dangerous with wrecks, injuries, and deaths, primarily from bystanders watching along the roadside, after several years the event was eventually canceled.

Anyone who has ever driven the open highways of Mexico probably has a reasonably good idea of how things must have been over half a century ago.  Not only vehicular traffic must be contended with, but animals, debris, and about anything else imaginable.

70 years later, the highway is a main conduit for migrants heading into the United States.  In spite of this unfortunate circumstance, I’m reasonably certain not very many are driving Ferraris.

Maybe not possessing the schmaltzy appeal of the 1950s Mexico version, nevertheless, there’s something to be admired when failed modern automotive technology is rescued by the creative genius of an everyday guy with a bar of soap.

I doubt similar techniques would work on today’s computer-laden vehicles.

How a Mexican Mechanic Saved Ferrari

The Untold Story “The Miracle”

MEXICO – In 1950 the Pan-American race arose. One of the most demanding endurance races in history that tested the best cars and the most experienced and daring drivers of the time.

In the middle of nowhere and without a spare part for this vital part of the car, hopes of finishing the race were slim to none.

In the fifth stage of the race and when the car was practically about to stop working, Umberto Maglioli made a stop in the middle of the road when he saw a small workshop called “El Milagro”.

Maglioli was received by Renato Martínez who was the owner and only mechanic of the workshop in the middle of nowhere. Renato Martínez confirmed to Maglioli that it was indeed an oil leak in the crankcase and that he had a “creative” solution to repair it in moments. At least to be able to finish his trip.

Renato Martínez picked up a bucket and a large bar of soap. He also took three small bottles of Coca-Cola and gave them to Maglioli saying, “While you drink these Coca-Colas I will fix your car.”

An Incredulous Maglioli could only sit back, drink the cokes, and hope for a miracle. Meanwhile, Renato Martínez disassembled the Ferrari and using the bar of soap began to gradually rub the sump with it. By friction, the soap melted and created a paste that sealed the leak hole. The soap “cuts” the oil and sticks to the metal of the crankcase and when it solidifies it became rock hard.

Amazed, Maglioli thanked Renato and took a small Roliflex camera out of the Ferrari, which he used to take a picture of that miraculous moment. “El Milagro” workshop and Renato next to the Ferrari 375 Plus under repair were immortalized.

Umberto Maglioli in his Ferrari 375 Plus, finished the fifth stage of the race in first place and changed the history of Ferrari forever.

Although Ferrari was a well-known car in Europe, it was not in America and the brand was far from being an economically viable business. Ferrari desperately needed to prove to America that its cars were superior, fast, and reliable. Winning the race would bring them recognition and with their sales in the United States, which would help them save the brand from bankruptcy.

Sometime later, Renato Martínez received by mail the printed photograph that Maglioli had taken of that moment. The photograph was signed: “To my friend Renato M. From Umberto Maglioli.”

The photograph came along with a letter thanking Renato and saying: “Renato, The Mexican Miracle that helped Ferrari.” That letter was signed by a man named Enzo Ferrari.