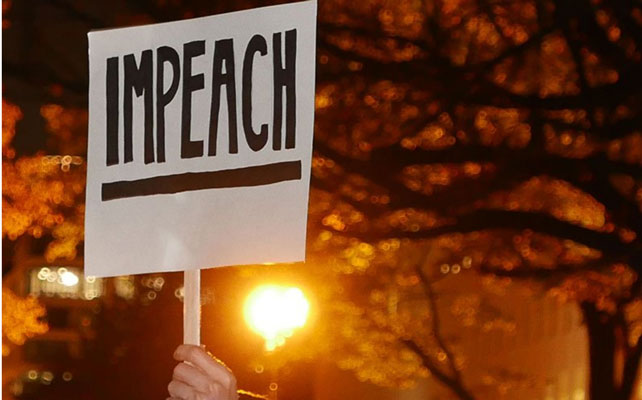 Photo By Susan Melkisethian/Creative Commons: Lawmakers’ have called for President Trump’s removal from office in the aftermath of the insurrection at the nation’s Capitol.

The nation’s Capitol is a magnet for people with complaints.  Always has been.  Jan. 6 is the latest example. Only this time, its hallowed halls were violently breached by protesters for the first time since the British set fire to the structure in 1814.

With the exception of some disgruntled Puerto Ricans firing off a few dozen bullets inside the House of Representatives in 1954 and an occasional irate citizen flipping-out, it’s been a relatively calm place the last few hundred years.

In what began as a peaceful demonstration involving several thousand President Trump supporters, eventually devolved into turmoil, with hundreds of angry dissidents storming the capitol’s walls and points of entry.  Police were quickly overwhelmed until the arrival of additional forces and the National Guard restoring order.

An uneasy truce was achieved later in the evening and the Electoral College resumed its duties of debating and deciding upon the final vote tally of the 2020 presidential election.  The constitutional process had survived, but not without significant injury and unrest.

The civil eruption had been simmering for several years until finally boiling over in a display of pent-up anger not seen since the Vietnam antiwar protests of the 1960s.  Millions of citizens had simply become irritated from being called deplorable, despicable, ignorant, and red-necked hicks by politicians, the media, academia, and the entertainment industry viewing themselves as superior in intellect and social status.   A Trump fan was simply considered a subhuman creature unworthy of recognition, except when comparing them to society’s most abhorrent life forms.

Then came the Democrats’ nonstop campaign to remove Trump from office.  Beginning his very first day on the job in January 2017, chants of impeachment and other accusations enveloped his office.  “Russian collusion,” a conspiracy theory between Vladimir Putin and Donald Trump in which they were accused of rigging the 2016 election, was the original “sin.”  After a two-year investigation, the case was dismissed for lack of sufficient evidence.

Following this fiasco, the hastily concocted impeachment charade, based upon a phone call between the president of the Ukraine and Trump, was set into motion.  Supposedly, Trump had made inquiries into Hunter Biden – son of Joe Biden, former Vice President of the U.S. – membership on the board of directors of a Ukrainian natural gas company.  The gas company was acknowledged as being corrupt, and Trump was wondering why the younger Biden was a highly compensated board member, in spite of having no education, no Ukrainian language skills, and no training or working knowledge of the natural gas business.

Again, the Democrats failed to produce verifiable evidence and witnesses Trump had committed a crime.  Nevertheless, the House of Representatives, under the leadership of Speaker Nancy Pelosi (D-CA), drafted Articles of Impeachment and forwarded them to the Senate for trial.  The Republican-held Senate voted to acquit and the affair quickly collapsed from its own clumsy presentation.

By this time, the 2020 presidential election was on the Democrats’ front burner.  With an assortment of candidates spanning the ideological spectrum, and none doing particularly well in the early Democratic primaries, the Dems were in a quandary of who to run against Trump.  After several state primaries, Joe Biden began to pull in the lead.  His future vice-presidential running mate, Kamala Harris, eventually dropped out of the contest because of a lack of support.  Reluctantly, former president Barack Obama finally endorsed Biden, but only after no one else was left to choose from.

Frustrated, on Jan. 6, 2021, the streets of Washington were inundated with thousands of Trump partisans, many demanding to know why their grievances were not being recognized by a government and court system pledging equal justice under the law.

In spite of President Trump cautioning rally crowds to peacefully march to the capitol, tempers flared and throngs of attendees rushed the building, sweeping aside police resistance and breaking into multiple offices and chambers.   For a while, chaos in the nation’s capital was televised to the world.  The United States Senate, its members, and staff temporarily scurried to safety.

It was ugly.  It was also a scene of what can quickly happen when sufficient numbers of people feel they have been shafted by an election process infused with uncertainties and ignored by an elitist mentality believing they know what is best for the everyday folks they reign over.

More often than not, the people that make this country function are infinitely smarter than those who presumptuously assume their social position, and know-it-all attitudes are all that is necessary to keep us deplorables in check.

Finally, if losing an election isn’t enough punishment, House Speaker Nancy Pelosi (D-CA) and Senate Minority Leader Chuck Schumer (D-NY) have called for Trump to be removed from office prior to Biden’s Jan. 20 inauguration.  Not certain if they are demanding another impeachment or invoking provisions of the 25th Amendment, which relates to a president’s health and inability to “discharge the powers and duties of his office.”  Maybe they’ll try doing both.  That would be another first for the Democrats.

Jumping on the anti-Trump bandwagon, our own U.S. Representative Tom O’Halleran (D-AZ), has also called for Trump’s removal from office via the 25th Amendment.

Either way, two weeks seems insufficient time to do either one.  More than likely, it’s probably just more nonsensical blather Democrats are spewing to show everyone they’re now in charge and have every intention of giving a departing Trump the same treatment they gave him when he arrived four years ago and every day since.

Before foolishly doing something stupid they might later regret, it may be wise to keep in mind the 2022 Midterm Elections are less than two years away.  Karma and payback are about the same thing. 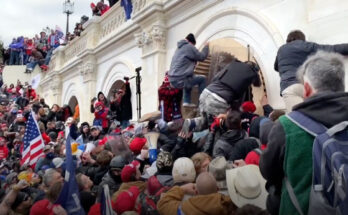