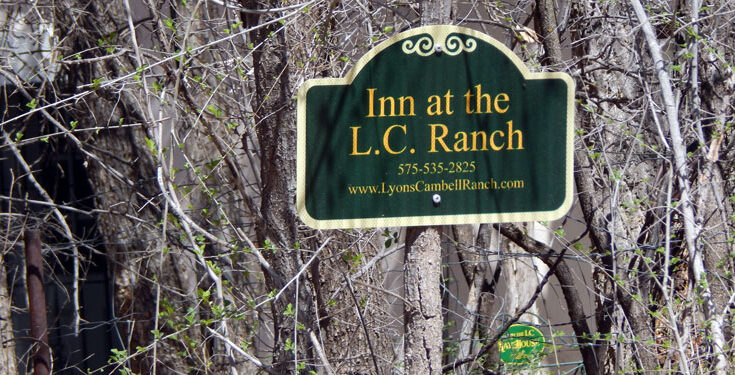 Photo By Mike Bibb: This sign promotes the L.C. Ranch.

The trails are lost, we used to ride. Our haunts forgotten too. Oh ghosts that gallop alongside, I’m of the past — with you. Never again shall we pass this way. Oh, my beloved, God in his pity our last day gave.

It’s not necessary to continually remind folks Los Angeles, Chicago, and New York City are centers of big-time crime.  Everyone knows that.  Goes on daily, and unless the offense is really exceptional, it hardly garners a headline.

However, we reside in a rural area of the Southwest where a murder-for-hire scheme is unheard-off.  Except, one has remained virtually unreported for over a hundred years.

It involved the co-owner of one of the largest cattle ranches in the United States.  And, was located just next door.

Across the Arizona/New Mexico state line – about 80 miles east of Safford, Arizona – are the tiny communities of Cliff and Gila.  Adjacent to the Gila National Wilderness, the area is heavily dependent upon rangeland ranching.  A tradition dating back a couple of hundred years.

Around 1878, Tom Lyons, born in England but raised in Wisconsin, hooked up with Scottish prospector Angus Campbell and went into the mining business around Silver City, New Mexico.  A few years later, they sold their interests and purchased a ranch 10 miles north of Gila, New Mexico.

Realizing water in the Southwest is more precious than gold, they immediately began grabbing all available water rights and moved their newly formed L.C. Ranch south to an area along the Gila River.

Tom and Angus steadily built the L.C. Ranch into a million-plus acre empire stretching dozens of miles in every direction.  At its peak, it grazed more than 50,000 head of cattle, sent 30,000 head to market yearly, employed more than 75 cowboys, seven chuckwagon teams, 400 working horses, and 100 Mexican families to tend the irrigated fields adjacent to the Gila River.

To provide for this large assortment of employees, Tom and Angus constructed bunkhouses, a saloon, jail, store, post office, barns, feedlots, warehouse, a Catholic church, and other necessary amenities to keep their small village as content as possible, since the nearest town, Silver City, was about 30 miles away.

Remember, there were no automobiles in those days – they would arrive several decades later.  A 30-mile ride by horseback or wagon was an arduous task, usually requiring a full day or more.  Then, the return trip to the ranch – equally tiresome.

Most impressive of the ranch’s structures was a Spanish U-shaped hacienda-style main house, parts of which were originally constructed in 1811.  Later, Lyons expanded and remodeled the 12-room building to about 40 rooms, capable of lodging guests and investors within the headquarters of their sprawling cattle business.

The L.C. Ranch was comparable to a modern corporation.  New Mexico was still a territory, necessitating the ranch be registered and incorporated in New Jersey, with sales offices in New York City and California.  The company also issued stock for purchase to the general public.  However, Lyons and Campbell were the principal shareowners, making sure they maintained a controlling interest in the company.

Lyons, the dominant partner, supervised everything from raising and shipping cattle by rail to California wholesalers, to slaughter, to selling the finished product to meat distributors and stores.  Virtually every step of the process from ranch to market was directed and monitored by Lyons.

Regionally, in the cattle trade, he was inspiring and imperious as Cornelius Vanderbilt, J.P. Morgan, Andrew Carnegie, John D. Rockefeller, and Henry Ford were to their respective industries.   Big business tycoons and other leaders would regularly visit the L.C. to hunt and talk shop.

On the surface, Tom Lyons appeared to be an affable and pleasant gentleman, but beneath the façade, he could be a conniving and shrewd businessman.  The immense size of his ranching operations was reflective of his knowledge and skills developed throughout his career.

For almost 40 years, he rode herd over the ranch.  As in many businesses, controversies would develop from time to time.  There was tension over water rights, open range, homesteaders, and angry ranchers contending the L.C. was wielding too much dominion in the area.  Occasionally, verbal and physical disputes would erupt.

Somewhere along the way of this grand and once profitable life journey, Tom Lyons must have made someone mad, really mad.

On May 17, 1917, while en route to a business meeting in El Paso, Texas, Lyons was murdered.  Not by a gunshot from a disgruntled worker or irate neighboring rancher, but beat to death with a heavy iron bar, clutched in the hands of a hired assassin.

An El Paso Sheriff Deputy responded to a call of a body tossed into a small rocky ravine.  Reports indicated the base of the skull had been crushed and at least 15 wounds inflicted on Lyons’ face and head – pummeled almost beyond recognition.  The murder weapon was discarded a short distance away.

It is believed Lyons’ car developed some kind of mechanical problem necessitating him to stop and investigate.  After lifting the hood, leaning over to peer into the engine compartment, he was attacked from behind.  Apparently, Tom had been followed by his killer.

Then, as now, murder of this nature was personal.  Someone wanted to send a message.

Assailant, Felix Jones, was later apprehended, arrested, and brought to justice.  Two additional co-conspirators were identified but never tried.  Perhaps fearful of his life, Jones refused to name the person, or persons, who paid for the hit.

The trial lasted nearly nine months and finally resulted in Jones’ conviction.  Without additional information or witnesses, the case was closed.

In spite of widespread opinion, and evidence the murder was premeditated and carried out by several individuals, Ida, the widow of Tom Lyons, refused to pursue further investigation and prosecution.

Unwilling or capable of holding the ranch together, Ida gradually sold the L.C. in parts. In turn, these parts were resold in smaller parts until the original property was finally dissolved over the years.

In 1961, Arturo Ocheltree, a former Grand Opera singer, and his wife, Bonnie, purchased the dilapidated home in Gila, and the few remaining acres.  A never-ending labor of love, Arturo and Bonnie’s descendants continue to restore the property in hopes of returning it to its illustrious past.

Presently, there are a couple of rooms for rent, three RV sites, and a small swimming pool available for inquisitive visitors.

Of historical significance, in 1963 the National Park Service published “Cattleman’s Empire,” detailing the chronicled importance of the L.C. Ranch.

In 1971, the ranch was designated a New Mexico Cultural Property.

It was listed on the National Registry of Historic Places, National Park Service in 1978.

The Ocheltree Foundation Inc. was established as an IRS 501(c)3, in 1984.  Financial contributions and donations became tax-deductible.

In 1998, the L.C. was recorded on “Save America’s Treasures” White House initiative.

AirBnB listed the property in 2016 with two guest apartments in the old bunkhouse.

A New Mexico Historical Marker was placed at U.S. 180 and NM Hwy. 211 in 2017.  Also, an application for National Historic Landmark was received by the National Park Service.

Tom and Angus are long gone, but their admirers strive to keep the legends alive.  The famous L.C. Ranch, once the largest or second-largest cattle operation in the country, may be struggling to remain more than a footnote in history, but its impact on the booming Old West was significant.

After more than a century, two unanswered questions still linger; what was the motive, and who paid for the horrific killing of Tom Lyons?