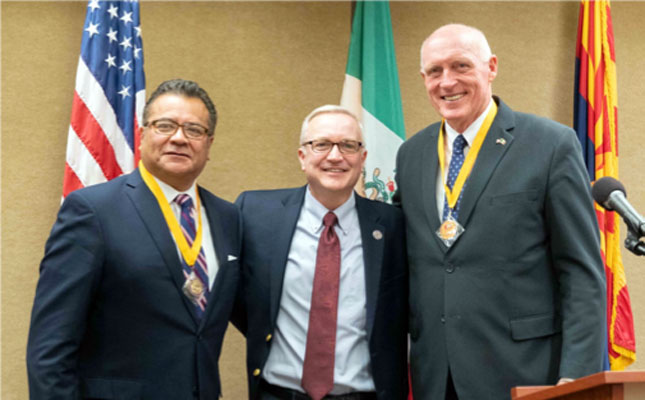 “We are standing on the campus of Eastern Arizona College which is located just south of the Gila River in Arizona,” said Haynie. “Prior to the Gadsden Purchase in 1854, this would be part of Mexico. Thirty-four years later, in 1888, Eastern Arizona College was founded as the St. Joseph Stake Academy. The reach of this institution over the next 134 years has expanded to not only include students who grew up in the Gila Valley but from many countries around the globe, including Mexico.”

House Speaker Rusty Bowers thanked EAC for hosting such a significant event and talked about his experiences living in Mexico. He stated that “all of us share a common heritage of being children of the same God, and that we owe each other the same respect.” Bowers then told the audience that EAC is known for respecting people of all faiths and from all walks of life.

Ambassador Pineda discussed the economic impact the U.S. and Mexico have on one another and the unique history, culture, and heritage each share. “We have been able to overcome every situation, but mainly, we are neighbors, we are partners, we are friends and brothers. To me, it is clear, that after 200 years of diplomatic relations we are going to continue widening and strengthening our relationship. We are projected to be (the) best partners and continue being one of the economic engines of the world. And that is why we want to continue celebrating our ties and our friends,” said Pineda.

At the culmination of the event, Haynie awarded Ambassador Pineda and House Speaker Bowers EAC’s Presidential Medal of Friendship.

“We are joined today by officials from both sides of the border who have supported us during critical times and are distinguished friends of EAC,” said Haynie. “Ambassador Pineda has expanded the number of Eastern Arizona College students across both borders and we are honored to welcome him to campus for the third time. House Speaker Bowers has supported EAC for many years I have a personal admiration for him, his personal integrity, unflinching leadership, and tremendous example to all of us.”