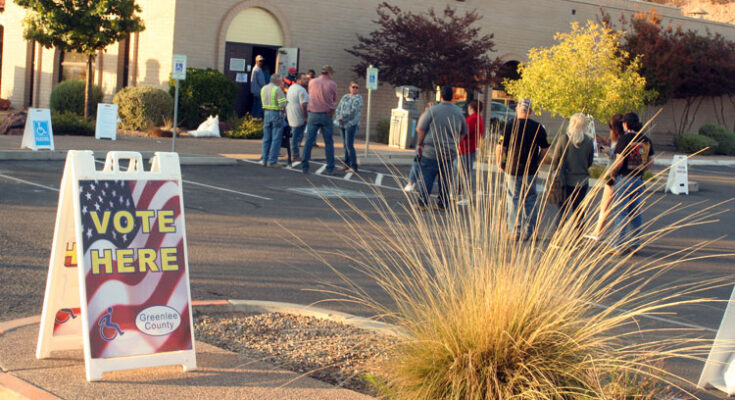 Walt Mares File Photo/Gila Herald: People line up to vote at the Morenci Club in this 2020 file photo. Those wishing to avoid election-day lines can vote early starting Wednesday, July 6.

SAFFORD – Today, Wednesday, July 6, marks the opening for early voting in this year’s Primary Election to be held on Aug. 2.

Early voting for the primary will continue to be open until Friday, July 29, at 5 p.m.

Those on the permanent early voting ballot list and those who have requested an early ballot or mail-in ballot can either return them to the Graham County Recorder’s Office at 921 W. Thatcher Blvd. in Safford or place them in one of five county drop box locations.

Registered voters may request an early ballot up to 11 days prior to an election. An early ballot may be requested by phone, in writing, or online at graham.az.gov.

To request to be included on the “Early Voting List”, submit either a preprinted form or a statement stating the request including the voter’s name, residence address, mailing address (within Arizona), date of birth, and signature. The form can be printed from the county’s website here.

Those who want to vote early but want to do so in person using either an electronic voting machine or paper ballot can do so at the Graham County Recorder’s Office at 921. W. Thatcher Blvd. on the General Services Building’s second floor. Voting is allowed Monday – Thursday, from 7 a.m. – 6 p.m., and the Friday before the election from 8 a.m. – 5 p.m.

Generally, a number of local races can be decided in the primary election, including town council and school board positions, offices with only one party running, and more.