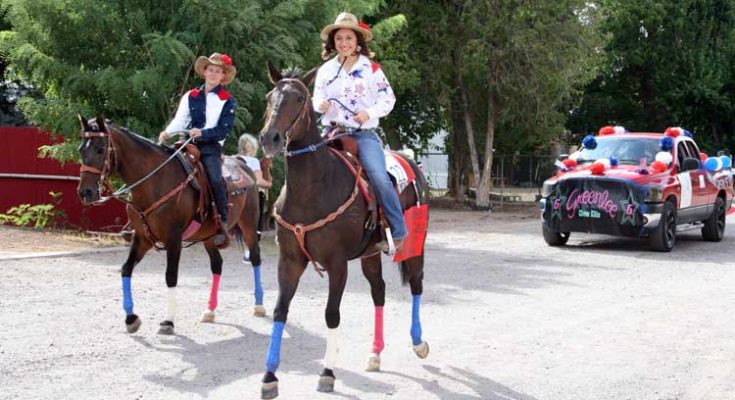 Photo By Walt Mares: No parade in Arizona would be complete without horses ridden here in the Duncan July 4 parade. The horses are strong symbols of tradition in the American southwest. They were key in settlement of Arizona providing transportation and working farms and ranches.

DUNCAN – The lineup was about a mile long. If it was not a mile, it was pretty close. That spoke highly for the Duncan July 4 parade.

A big part of the charm and beauty of the parade was that it was every bit small town and Home Town, U.S.A. The parade and followup events did not have one bit of corporate touch or appearance to them. It was truly an all-local event.

One may say that along with being truly rural, Duncan’s Independence Day celebration was warm and welcoming.

Besides the strong participation, a full cloud cover had set in by the parade’s 7:30 a.m. starting time. The day’s temperature was predicted to be 100 degrees. Without the sun beating down directly on folks, it felt much more comfortable. No one was heard to complain about the weather conditions making anyone miserable.

There were several parade entries that were colorful, unique and very much on the mark in relaying the message of freedom and love of country. Homage was paid to those who have served or are serving in the U.S. Armed Forces to protect and preserve Americans’ independence and freedom.

Accompanying Goodner was his wife Lucille, known locally as “Mickey.

Behind the three vets, who rode in a cart, was Jesse Stillman in his 1966 Dodge Power Wagon. Riding in the truck bed were youngsters, while at the far back of the truck flags from Duncan American Legion Post 49 and a POW-MIA flapped in the breeze.

The Power Wagon was a piece of American history in its own right. The pickup’s bed was made of wood reinforced by correlating strips of metal. Stillman said Power Wagons were not manufactured for very long and were used mostly by the U.S. Forest Service or to accommodate equipment for drilling rigs. The truck’s color was a familiar light green still used by modern-day vehicles of the USFS.

Right behind Stillman was yet another piece of American history. It was Lester Clark’s sky blue 1932 Ford pickup truck. Clark said the truck came from Luna, New Mexico prior to his restoring the vehicle. It was not perfectly refurbished – part of the front hood was missing –  but there was no doubt the truck was from a long gone era.

In the truck’s bed were four youngsters decked out for the patriotic occasion, They are all cousins: Tyler Wayman, Katherine Mulry Samantha Mulry, and Hannah Wayman. Situated behind them was yet another cousin, Grady Cox, with his Suzuki ATV, which was decked out with several pieces of green camouflage gear. It was impressive.

Behind him were the Greenlee County Democrats with a simple but very strong and non-partisan message of “Be Patriotic – Register To Vote.” County Chairman Susan Breen, Clifton, wore a donkey suit, which covered her from head to tail. The Democrats’ mascot has nationally long been a donkey.

She was accompanied by Gilbert Sanchez, also of Clifton, who wore a long coat which read on back, “Democrats really Care. Do U?” It was a takeoff on First Lady Melania Trump’s jacket that bore a quite controversial statement of “I really don’t care. Do U?” She recently wore that to a border detention facility that houses children taken away from their parents, who have come illegally to the U.S. from foreign nations such as Mexico and Central America.

An entry that really hit home about the solidarity between Duncan’s and the rest of southernmost Greenlee County, as well as Virden, which is located in New Mexico just across the Arizona-New Mexico state line. Virden had a large, modern fire truck with a sign that read “We Stand Together!” Beneath the sign was a poster that showed flames and the silhouettes of two firefighters working together.

Two Greenlee County elected officials – Treasurer Diane Berube’ and Supervisor Richard Lunt, who represents southern Greenlee – had parade entries. Positive remarks from spectators included the fact that both participated in the parade although neither is up for election this year.

Results of which entries took parade honors was not available at press time. However, one entry that would be hard to beat was that of Robinette Construction. A long trailer beautifully decorated with an arch of red, white and blue balloons hovered over a large group, most of whom were young people, who sat and stood on the entry’s platform. They were all clad in red T-shirts, no doubt to emphasize solidarity. People on the platform were smiling and appeared quite happy and relaxed as they conversed with each other.

A banner atop the platform said it all regarding unity, friendship and what a free people can accomplish. The sign read, “United As One We Get More Done.”

Click here to see a photo album of the parade.