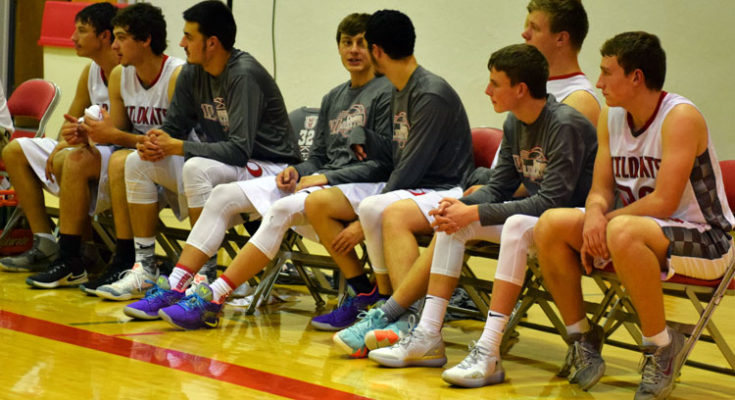 Raymundo Frasquillo Photo/Gila Herald: Duncan’s regular eight-man rotation observed reserves do their stuff during the second half with the Academy of Tucson Lynx, a 94-38 win. Duncan fell Saturday, however, 65-55 to Cibecue.

CIBECUE – Duncan ventured into the Cibecue Dome for a non-region contest with the Wildcats on Saturday, Dec. 8 and came up short, 65-55.

Senior Weston Skinner plus freshmen Conlon Jensen and Gabriel Roybal have not attempted any free throws.

The outmanned visitors outscored the Wildkats 22-19 in the second half. However, outings of 33-16 in the opening period plus 42-0 in the second period by the regular ght-man rotation gave Duncan a 73-16 halftime advantage.

“I brought up some playersfor this game,” Merrell said. Each of the 14 players suited up for the Scarletand Gray contributed to the scoring total. The final three points, added by Skinner for a 94-30 advantage with 6:33 left to play, caused the bench to leap in celebration for him. A technical foul was assessed on a player whose momentum carried him onto the court. The Lynx went on an 8-0 run to end the game.

Bigler added six points, Kempton and Roybal four each, and both Garner and Jensen three apiece.

The visiting Wildkats led 18-6 following the opening period, 30-20 at halftime, and 53-29 at the start of the fourth period.

Despite a 12-8 final period outing against Cimarron, Duncan fell by four points after trailing 44-36 at the start of the final eight minutes. The Rams led 27-25 at halftime and theWildkats had a 9-8 opening period edge.

Hille and Lemmon both chipped in 11 points. Pierpont and Smith added eight points apiece, Hansen four, and both Basteen and French three each.

Duncan led 43-37 heading into the final eight minutes, but the Cowboys turned in a 23-13 fourth-period outing to win by four. Cliff led 29-24 at halftime and 17-12 following the opening period.

Three of seven Cowboys scoring were in double figures with 16, 12, and 11 points.

Duncan was two points shy of doubling the score on the Cougars, leading 34-17 at halftime, with a 32-17 outing during the third period. Seven different Wildkats combined for 12 field goals (four 3-pointers) plus 4-4 free throws.

The visiting Wildkats had double-digit scoring during each of the periods compared to single digits for each by the hosts. A 20-point advantage, 39-19, was on the guest side of the scoreboard at the start of the final period. Duncan led 22-13 at halftime and 12-4 following the opening period

Six Blue Devils scored but none in double figures.