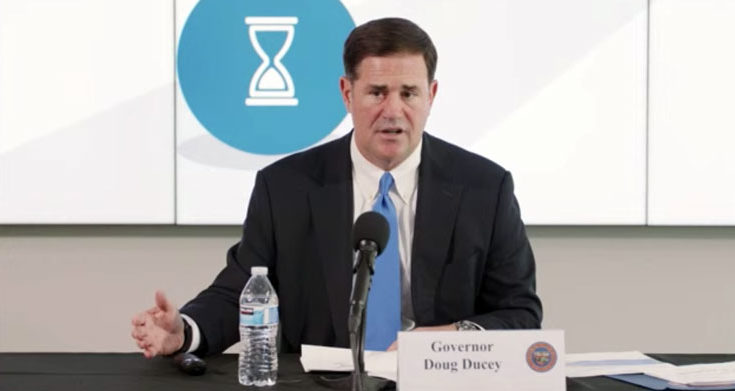 Doug Ducey announced gyms and pools can reopen Wednesday, May 13, and major league sports can resume Saturday, May 16.

PHOENIX – After advising that Arizona is meeting the White House’s gating criteria for reopening, on Tuesday, Governor Doug Ducey announced the state would proceed to allow gyms and pools to reopen Wednesday, May 13.

Ducey also announced that major league sports, including baseball and basketball, may resume activities in Arizona starting Saturday, May 16, with no fans in attendance. He said that it is up to each individual Arizonan to decide for themselves if they believe they are safe to go out and that it is time to turn back on the economy while doing so with public health still being a priority.

While Arizona has seen more cases due to the increase of testing, the percentage of positive tests out of those taken has continued on a downward trajectory for the past four weeks. Ducey also advised that hospitals in Arizona are prepared in case of a resurgence of cases, with plenty of available beds, ventilators, healthcare providers with adequate personal protective equipment and that the state has acquired more than 210 million pieces of PPE since March 1 from the federal government.

“Arizona is headed in the right direction,” Ducey said.

However, Ducey said while the data is a green light to proceed, it is not a green light to speed and that the state would move forward in a responsible way. The state will continue to test those in assisted living facilities and prisons and workers at those facilities as well as first responders in an attempt to cover the most vulnerable section of society.

“This does not mean a return to normal,” Ducey said. “This is the next step forward on the way out of this pandemic. We cannot forget about who is most vulnerable. Those folks who are 65 years or older with an underlying health condition are still in that situation.”

Even with moving forward, schools remain closed, in-person visits at nursing homes remain prohibited and Ducey recommends the continuation of teleworking for those currently doing so.