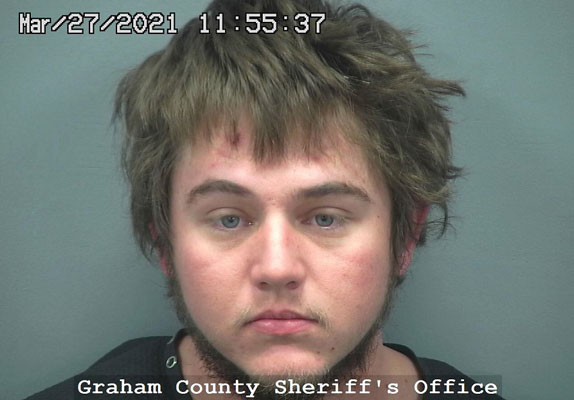 THATCHER – A volunteer Thatcher firefighter was jailed early Saturday morning after firing multiple shots from his handgun in a residential neighborhood near Eastern Arizona College.

Tyler Patrick Gebbie, 24, was arrested and booked into the Graham County Adult Detention Facility on charges of criminal damage, unlawful discharge of a firearm, and discharging a firearm at a structure. An additional charge of discharging a firearm within city limits (Shannon’s Law) was later filed Tuesday in Pima Justice Court, along with the other three charges.

According to a Thatcher Police report, officers were dispatched at about 3 a.m. to the area of 565 N. College Ave. regarding multiple gunshots. Officers from Safford and the EACPD responded as well, along with deputies from the Graham County Sheriff’s Office.

Gebbie was quickly located by a Thatcher officer as he stood on the corner of College Avenue and Church Street. Upon arrival, Gebbie tossed his handgun to the ground and was taken into custody without further incident.

According to the report, Gebbie admitted to shooting at a connex box near the Eastern Arizona College Fine Arts Auditorium. He also allegedly advised of shooting into the air near some apartments in the area of College Avenue and Church Street. Evidence located at the scene showed Gebbie had struck the connex box as well as a stop sign near where he was apprehended. In all, Gebbie believed he had shot off eight or nine rounds and had just reloaded the magazine on his High Point 9mm pistol before the arrival of officers.

Gebbie, who appeared intoxicated according to the officer, allegedly said he was just blowing off steam. He was found with his department-issued firefighter pager and said he had been monitoring the Graham County Dispatch police call regarding his actions. A portable breath test resulted in a .228 breath/alcohol concentration.

The investigation revealed the connex box and stop sign had both been struck twice. Shell casings were found at each location, and more were found in the street and in front of a residence.

The handgun, which had its serial number defaced, and six rounds of additional ammunition were seized and Gebbie was transported to jail. Later, a federal ammo box was also retrieved from Gebbie’s apartment.