Jon Johnson File Photo/Gila Herald: A man was arrested for DUI after being pulled over for driving at night without his headlights illuminated.

SAFFORD – The Arizona freeway anti-DUI signs read “Driving Drunk Will Put Your Lights Out” but in this case driving without lights at night led to a DUI arrest.

Adan Martinez, 21, was arrested in the early morning hours of Wednesday, Nov. 20, after an officer noticed a light-colored Ford truck eastbound on U.S. Highway 70 driving without its lights on at about 1:59 a.m.

The officer initiated a traffic stop and the driver, later identified as Martinez, pulled into the parking lot of the Bull Pen bar. Upon contact, the officer reported Martinez was eating a cheeseburger and had bloodshot, watery eyes and a “confused look on his face.”

Martinez was unable to provide a driver’s license, registration, or insurance, and allegedly admitted to drinking “about five beers.” He said he was on his way back to Pima but was traveling the wrong direction. When informed of that fact, he allegedly told the officer he was going to use the back roads.

After failing a field sobriety test, Martinez was arrested for DUI and was taken to the Safford Police Department. Once there, Martinez became argumentative with the officer and repeatedly asked him why he was “picking on him and not messing with anyone else leaving Shane’s Place bar.”

The officer informed Martinez that he had pulled him over on the highway for driving without his lights on that and that he hadn’t been by Shane’s Place that evening.

Martinez then asked, “Why didn’t you pull over any of the cars behind me? They were drunk too.” The officer then replied that no cars were behind him and reiterated that he was driving without his headlights being illuminated.

After retrieving a blood sample for testing purposes, Martinez was released from the police department to family members. Official charges are pending lab test results and a review from prosecutors. 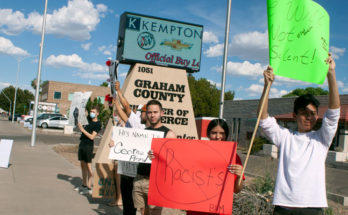