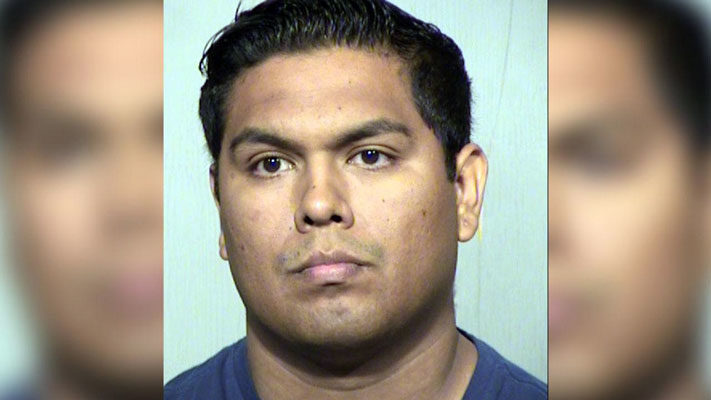 Contributed Photo/Courtesy MCSO: DPS trooper Pedro Javier Aguila Muniz was booked into jail after an investigation learned he allegedly used a state fuel credit card to steal gas and for using his police access to look up people without a criminal justice reason.

A news release Thursday revealed the case against Aguila, who had been assigned to the Highway Patrol Division’s Metro Phoenix Bureau for roughly two years.

The DPS began investigating Aguila in May after the department learned of discrepancies with his record-keeping relating to his on-duty timesheets and patrol vehicle mileage usage. The investigation found that Aguila allegedly used his assigned patrol vehicle for personal use and to hide unauthorized fuel purchases performed with a state-issued fuel credit card. Detectives found that Aguila allegedly used the credit card to purchase gas 21 times that he put into four personal vehicles between January and July.

Additionally, the investigation found that Aguila had also used the Arizona Criminal Justice Information System (ACJIS) to look up people without having a criminal justice purpose, which is against state law.

“Aguila’s extensive misuse of department-issued property and his willingness to violate clear and specific laws, policies, and rules was evident throughout the investigation conducted by our detectives,” said DPS Director Colonel Frank Milstead.