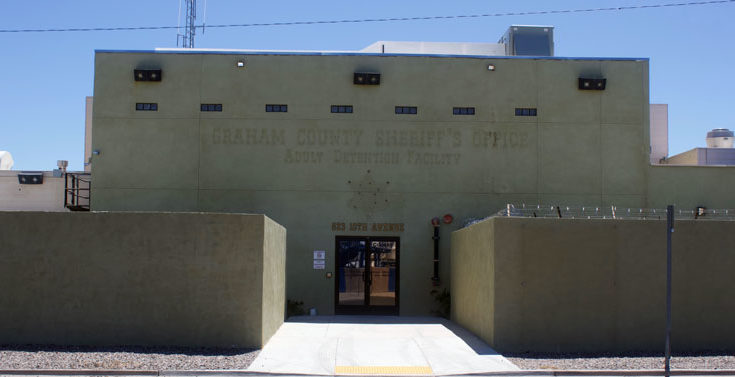 Jon Johnson Photo/Gila Herald: The old jail is slated to be demolished this month to make way for a new, $2.56 million Safford Police Department.

Site will be cleared to build new Safford Police Department

SAFFORD – Get ready to see the institution that held so many be torn down to nothing.

Demolition on the former Graham County Sheriff’s Office/Jail at 523 10th Ave. is slated to begin this month, now that the Safford City Council has awarded the demolition contract to Breinholt Contracting Company of Gilbert for $200,503.

The demolition project includes asbestos removal, the complete destruction and removal of the existing building and basement, and backfilling the lot to leave a plain dirt lot ready for the construction of the new police department. The project is expected to take three weeks to complete.

At its Aug. 12 meeting, the council approved the bid of Morgan Chase Bank to finance the $2.56 million project. The financing will be for 15 years with a 2.098 percent interest rate.

The city received the property of the old Sheriff’s Office and jail site after it and Graham County approved exchanging the property for setting a 25-year fixed water rate for use at the Graham County Fairgrounds to water the ball fields at $2.20 per thousand gallons while the normal industrial rate for businesses in Safford is $2.65 per thousand gallons. The county previously had a cheap water rate at the fairgrounds that expired about four years ago, and the idea of getting a new water-rate deal along with not having much use for the old facility spurned discussion. The county currently uses about 50 million gallons of water at the fairgrounds each year.

According to Safford City Manager Horatio Skeete, the agreement also includes a commitment from the city to explore getting its effluent line from the wastewater treatment facility to the fairgrounds. If the city can afford to put in the effluent line, the county will guarantee to purchase $110,000 per year of reclaimed water or $2.50 per thousand gallons per year – whatever is greater.

Skeete said the cost to put in an effluent line to the fairgrounds is estimated to be at about $3.5 million, which, in turn, would be paid back by the county paying to use the water. Currently, the city is finishing up a holding reclaimed water pond by the wastewater treatment facility and only uses reclaimed water at the golf course.

“The plan is to use that $110,000 a year for debt service of the construction of the pipe so it will pay for itself – with some help from some other sources,” Skeete said.

The first two priorities for reclaimed water use will be the golf course and the fairgrounds and the city will leave taps at the schools to use for their fields if any reclaimed water is left over. Currently, the wastewater treatment facility produces 19 to 20 million gallons per month. Any of that water that doesn’t get used at the golf course gets dumped into the Gila River, which the city does not get any credits for doing so.