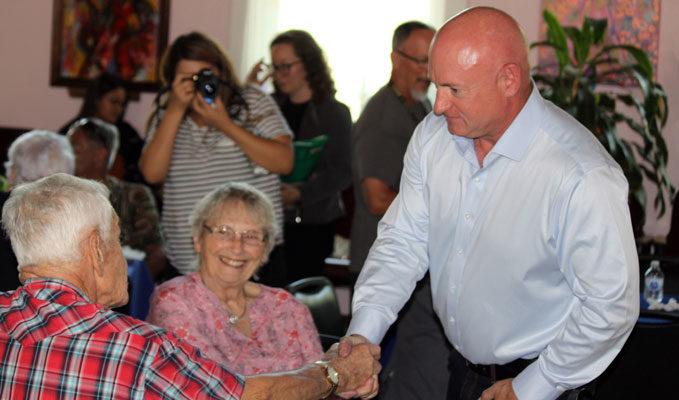 Jon Johnson Photo/Gila Herald: Former astronaut and retired Navy Captain Mark Kelly greets those in attendance at an event at the Blue Door Sanctuary in Clifton on Friday. Kelly is running for the Senate.

GREENLEE COUNTY – Maverick was the term to describe the late Sen. John McCain. It is also the character in the 1986 movie “Top Gun” that helped inspire Mark Kelly to join the Navy and fly airplanes off an aircraft carrier. Similar in stature, look, and beliefs and both being Navy pilots, one could see Kelly as being the sequel to McCain just as a Top Gun sequel is in the works as well. Fittingly, just as McCain was first elected to the Senate in 1986, Kelly looks to secure the late senator’s seat and represent the people of Arizona in Washington D.C. in the 2020 election.

Kelly was previously registered as an independent before registering as a Democrat to run for the senate.

After touring Graham County institutions, including Eastern Arizona College and Mt. Graham Regional Medical Center on Thursday, Kelly spent some time at a Democratic Party event in Greenlee County at the Blue Door Sanctuary. Kelly also took time to visit some area elementary schools – not to talk politics but as an astronaut and talk space and technology with the students – and enjoyed a bite to eat at La Paloma in Solomon.

At the Blue Door Sanctuary event, Kelly outlined why he is running for Congress and said the federal government has been stagnant in serving the people because candidates are beholden to corporations and special interests. In that vein, he has vowed not to accept any campaign donations from political action committees.

“What angers me is that Washington D.C. isn’t even trying – they’re not even trying to solve these problems,” Kelly said. “And our political system, it’s kind of broken. And it’s broken for a couple of reasons. I think the primary reason our system is broken is because of the corporate money that goes into political campaigns to get specific people elected to office. And it needs to stop.”

Prior to the event, Kelly told the Gila Herald that he would be an on-hand senator for the region and outlined how he believes the country should move forward in addressing how to curb gun violence in the wake of multiple mass shootings. Kelly’s own wife, former Representative Gabrielle Giffords, was one of the victims in a mass shooting at a Safeway supermarket on Jan. 8, 2011. Giffords was severely injured when a mentally ill man – armed with a Glock pistol loaded with a 33-round magazine – shot 19 people, killing six.

“I come at this as a gun owner,” Kelly said. “I own a lot of firearms. I’m a strong supporter of the Second Amendment. At the same time, we have 40,000 people – including a lot of kids (who) die from gun violence every year (and) another 100,000 injured but survive. The cost to our country . . . it’s incredible. And we need to do something about it. We need to do some common-sense steps that most Arizonans support – things like background checks for all gun sales. Most folks in the state – well over 70 percent – think that’s a good idea. We need to pass that kind of Legislation. The reason we don’t is we’ve got folks in Washington D.C. who are more beholden to the gun lobby than they are to citizens here in Arizona. And that’s what we need to fix.”

During his time in NASA, Kelly flew four times in the space shuttle into outer space and was the last commander of Space Shuttle Endeavor.

“NASA is where I learned how to solve hard problems using teamwork and being focused on a mission and working with people from different backgrounds, different countries, and different political systems,” Kelly said. “Because when you’re going around the planet at 25 times the speed of sound and bad stuff starts to happen, leadership is finding a way forward together And I don’t see that from Congress.”

Kelly is vying for the late Sen. John McCain’s seat, which is currently held by retired USAF Colonel Martha McSally (R), who was appointed to her position by Governor Doug Ducey after narrowly being defeated by Sen. Kyrsten Sinema (D). It had been 24 years since Arizona had a Democratic Senator, and if Kelly wins the seat it will be the first time in 68 years for both senators of the state to be Democrats. If Kelly is the Democratic nomination, he will likely face McSally in the general election.

“Change is good,” Kelly said. “I had a former commanding officer of mine in the United States Navy – a guy named Terry Topps – that I really respected and I learned so much from him about leadership. He used to say ‘if you’re not changing it, it’s getting worse.’” 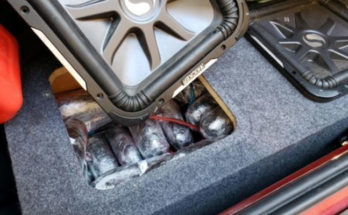