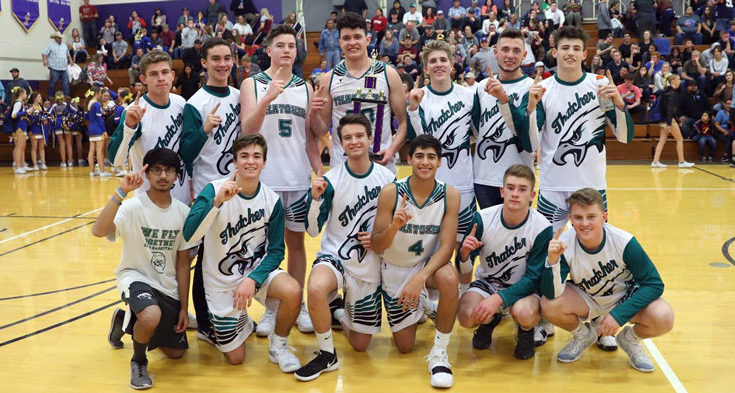 THATCHER – The ability to hit from deep was a difference maker Wednesday, as the Thatcher Eagles hit six 3’s compared to zero for Pima en route to a 56-39 victory in the championship game of the 56th annual Eastern Arizona College Boys Holiday Tournament.

“We had a lot of good looks early that just didn’t find the bottom of the net,” Riehemann said. “I thought Kason (Crosby) hit a big shot there. (It was) a total team effort on our guys. I’m really proud of them.”

Indeed, four Thatcher players, Crosby (12), Rulon White and Matthew Palmer (both 11 each), and Cole Motes (10), all scored in double figures, while Trace Goodman just missed the mark with 8. White and Motes both added 10 rebounds to their score sheets to come away with double-doubles.

Both teams rebounded defensively well and limited the other to mostly only one shot attempt during each possession. However, it appeared that Thatcher conducted its fast-break and half-court offense better, coming up with points when needed on open back-screen cuts to the basket or quick outlets off a Pima miss.

The Eagles opened an 8-6 first period lead on the back of 3-pointers by Goodman and Palmer, along with a shot by Motes in the paint. Pima looked to stay close with buckets by Hayden Ashby and Alec Judd, who danced in the paint all night as he blew by his defenders.

Thatcher looked to open it up in the second period after White roused the Eagles faithful with a thunderous fast-break dunk off a quick outlet pass, but the Roughriders wouldn’t go away as Jake Whitaker found the hoop twice in the period.

Another fast-break bucket, this time by Goodman, and a score by Palmer followed up with a steal against Pima’s big man Dawson Pruszynski and a followup jump shot by Motes put the Eagles up 20-18 at the half.

White started to get open on those back cuts in the third period, but Judd and Tim Salyer countered to keep it close at 28-27, with about half the period eclipsed.

The 3-point disparage again came into play as White and Goodman hit from deep. Palmer then scored on a rebound putback, and Crosby got wide open on a back pick cut for an easy layup to put Thatcher up by 9, 38-29 as the teams headed into the final period.

“We had a little bit of a mental lapse and didn’t get out on the shooters and they made us pay,” said Pima head coach Cliff Thompson. “They’re a good shooting team. They’re a good offensive team. You can’t have lapses on defense and stay with them . . . We made it easy for them to back cut and back screen us because we were in poor (defensive) position. We gotta work on that.” (sic)

Pima continued to battle back as Judd hit a lay-in and Pruszynski scored down low to cut the lead to just 2 points, 38-36. Judd finished with 11 points on the night, Pruszynski had 10 and Whitaker scored 6.

After the Pruszynski score, White drove the ball to the right where Judd had rotated off Crosby to halt White’s progression. White pummeled into Judd in an apparent offensive charge, but no call was made and White managed to pass it out to Crosby. With Judd crumpled underneath White, Crosby stroked a 3-pointer and Thatcher never looked back.

Pima went on to score only one more field goal in basically garbage time, as Crosby hit a second 3-pointer and Thatcher took home the title, 56-39.

“Obviously, it’s a big rival,” Riehemann said. “They had our number last year and I know it’s one that they really wanted to win. I’m glad that we were able to do it tonight.”

While they didn’t achieve their goal, Thompson said he was pleased with the level of play from his team.

“I’m happy with my guys,” he said. “We were kind of going through a tough stretch there and we came in here and we competed against some really good teams . . . We played the whole Gila Valley in this tournament and we went 2-1, so I’m really proud of our guys and we look forward to future games with Thatcher.”

Afterward, Cole Motes was honored as the MVP of the tournament.

“It was a good win,” Motes said. “Hopefully, we can keep things rolling into the rest of the season and use this momentum to keep on rolling.”

Thatcher kept its winning ways going Friday by defeating Benson, 84-56. The Eagles will next travel up north to Blue Ridge High School to play a double header Dec. 27 against American Leadership Academy-Queen Creek at 2 p.m. and then face the Coconino Panthers at 5 p.m. in the White Mountain Holiday Classic. The Eagles are sure to hope their holiday tournament winning ways continue.

Pima will lick its wounds through the holidays and will get its chance at redemption Jan. 8 when it travels to Thatcher for a rubber match against the Eagles, this time with regional seeding on the line.