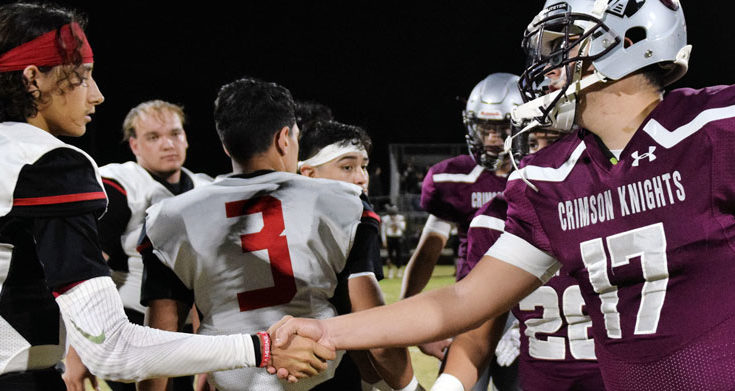 Raymundo Frasquillo Photo/Gila Herald: Morenci senior Brandon Blair shakes hands with Trivium Prep senior Kade Gutierrez. The captains met at mid-field for the pre-game coin toss. The No. 2 Crimson Knights came from behind to defeat No. 15 Morenci 35-28 on Nov. 8.

Trailing by a wide right conversion kick, 28-27, Trivium Prep drove 66 yards in seven plays for the go-ahead score. Senior running back David Marquez bulldozed in from 19 yards out and senior quarterback Kade Gutierrez added the conversion run. The Crimson Knights led 35-28 with 3:25 remaining.

“I expected to be the guy to lead us to victory,” Marquez said when asked if he expected to be the one to contribute the go-ahead score. He crossed the goal line four times in averaging 6.0 yards (34-203) per carry. His numbers during the 9-game regular season were an 11.5 (153-1,758) yard average per carry with 23 TDs. The Crimson Knights averaged 5.3 (57-300) rushing yards per carry against Morenci.

The Crimson Knights gained 17 yards in four plays before taking a knee to wind down the clock.

Morenci led 28-7 at halftime, but Trivium Prep scored 28 unanswered points to advance to the next round.

The Crimson Knights had nearly three times ball possession than Morenci in both halves but gained only 107 yards to 131 in the first half to trail by 21 points. The Wildcats’ scoring was on two defensive plays and two on offense.

“There were some anxious moments in the first half,” fourth-year Trivium Prep head coach Michael Spencer said.

“We expected to bring our lunch pails in and it would probably be a dog fight,” he said. ”We had to match the intensity with them. We have tremendous respect for Morenci.”

“If you don’t want to end up like this a year from now,” he said, “Do something about it. Each missed 7-on-7 session or weight room session in the off-season adds up.”

His “you get out what you put into” words were aimed at the underclassmen on the team. All he could say to the soon to graduate members was, “I can’t change anything for you, but if you need something, don’t hesitate to ask, I will do my best to help you.”

Six Morenci Class of 2020 members played their final game in a Wildcats’ uniform. Another 22 student-athletes are expected to return for the 2020 season.

Trivium Prep numbered 14 seniors on its 38-member roster, eight were listed on the previous three rosters, two on three, one on two, and three were participating in their initial campaign. The other 24 student-athletes included seven juniors, 11 sophomores, and six freshmen.

The Crimson Knights marched 86 yards in 17 plays using 8:20 during their initial possession. Marquez bulled in from three yards out for his first of four touchdowns and sophomore Andrew Kerfoot added his first of three conversion kicks. The home team led 7-0 with 3:29 left in the opening quarter.

Morenci went three-and-out, punting after gaining a yard during 2:20.

Trivium Prep gained two yards after snapping three plays and threw an interception, plus netted six yards in six plays and fumbled, on its ensuing possessions.

Morenci scored on both turnovers. Sophomore Tyler Correl returned the interception 10 yards and junior Joseph Hernandez returned the recovered fumble 20 yards. Hernandez added both conversion kicks to give the Wildcats a 14-7 advantage with 4:03 elapsed in the second quarter.

Morenci scored twice more, in two plays using 1:05 covering 81 yards and in one play using nine seconds covering 13 yards, and gained 36 yards in five plays using the half’s remaining 2:12, on its next three possessions. Senior Carlos Bray used teammates’ blocks en route to a 76-yard TD and the conversion kick was blocked, an interception set up a Bray 13-yard TD and senior Brandon Blair added the conversion run. The Wildcats led 28-7 with 4:45 left in the first half.

Morenci received the second-half kick-off but fumbled the onside kick. Its ensuing five possessions ended on fumbles twice more, on downs twice, and in a punt.

“The thrill of victory and the agony of defeat” were displayed on opposite ends of the Trivium Prep football field following the conclusion of the contest.

Trivium Prep played two seasons in the 8-man format and went 1-1 during its initial 2A season in 2018, eliminating No. 15 Teec Nos Pos Red Mesa 55-7 in round one before falling 47-7 to No. 7 Saint Johns in the quarterfinals. 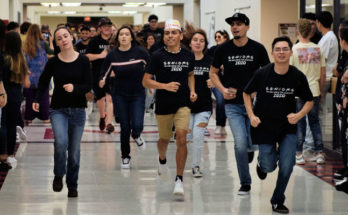