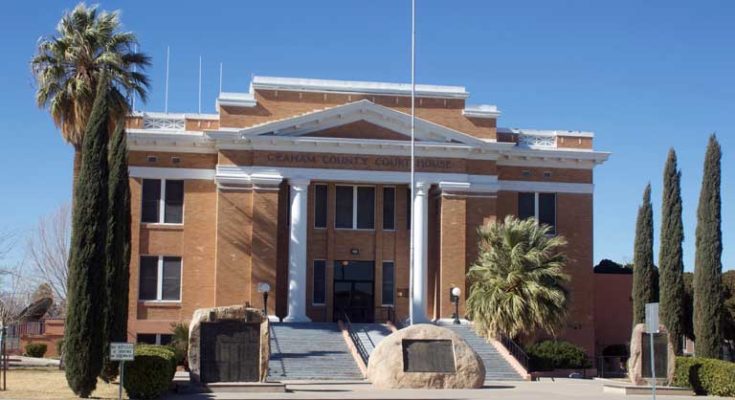 Jon Johnson File Photo: The Graham County Courthouse will be home to the consolidated Justice of the Peace.

Justice of the Peace Precinct 2 in Pima to close

GRAHAM COUNTY – In a cost-savings move, during its Monday meeting, the Graham County Board of Supervisors voted to consolidate the Justice of the Peace Courts for Precinct 1 and 2 to one court.

According to a news release from Graham County Manager Dustin Welker, consolidating the court will save approximately $120,000 per year. The release also stated that the decision was based on cost-savings measures and to maximize county staffing efficiencies. Yet, the release also states the staff of five full-time employees at JP1 and two full-time employees at JP2 will all be retained at the new consolidated court. However, one position not mentioned in the release will be eliminated – the court will only need one judge.

Currently, Judge Gary Griffith is the JP1 and Judge Wyatt Palmer is the JP2. Both are elected positions with terms that end in December 2022. With the time quickly approaching when candidates have to take out election papers, the county made this decision to alert the judges to what positions will be open in the next election year.

Judge Palmer told the Gila Herald that he hasn’t made a decision on whether to run for the position or not but said he was in favor of consolidating the courts.

“It’s not a bad idea in my opinion,” Palmer said. “I kind of think it will be a good thing.”

In December 2017, the three municipalities of Safford, Thatcher, and Pima agreed to join their various municipal courts into one Gila Valley Consolidated Court located in Safford in a cost-savings move.

Welker said the workload for both JP courts has been low enough that the consolidation to one court will still leave the workload “well below the statutory maximum of 1,200 credits.”