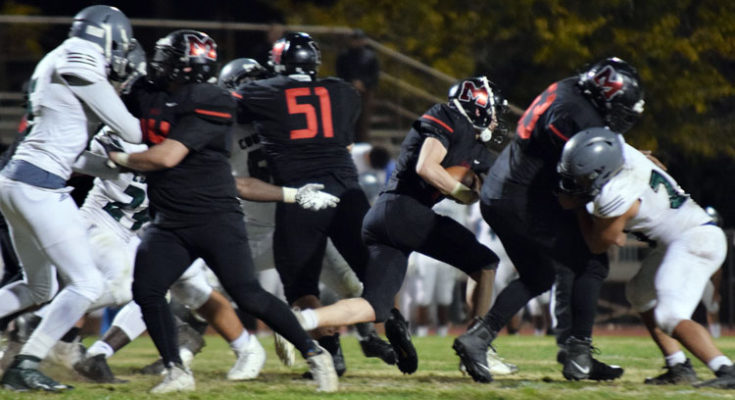 Raymundo Frasquillo Photo/Gila Herald: Isaac Pacheco knifes between his blockers. Pacheco had a big night running the ball, but the Wildcats came up short and fell to the Phoenix Christian Cougars 27-14.

MORENCI – The No. 4 Morenci Wildcats (2-2 region, 8-3 conference, 9-3 overall) fumbled away their season and a rematch with Thatcher in the semifinals Friday night, falling to the No. 5 Phoenix Christian Cougars (6-0 region, 8-1 conference, 10-2 overall) 27-14 behind a four-touchdown night from its running back, Malik Taylor.

“You can’t give the ball up and expect to win the football game, especially in the playoffs,” Morenci head coach David Gallegos said.

The Wildcats came out strong, stinging the Cougars on the opening kickoff and then forcing a 3-and-out.

On their first offensive series, the Wildcats were heading toward the end zone when Cougar Ramon Castro pried the ball away from Morenci quarterback Brandon Blair as he was fighting for extra yardage and Phoenix Christian recovered the fumble at its own 11-yard line, stopping the Morenci scoring threat.

The rest of the first half went Morenci’s way, however, as Cougar quarterback Mark Encinas overthrew Taylor and Angel Arrellin made an acrobatic play to tip the ball to himself and pin it with one arm to his shoulder pad as he was going to the ground to come up with the interception.

The Wildcats made the most of the turnover and ended up with a 1st-and-goal after two big screen plays to Tito Casillas racked up 32 yards and a facemask call against the Cougars.

On 4th-and-goal from the 3-yard line, Blair just broke the plane of the goal line as he stretched the ball out while running through three Cougars on a quarterback sneak. The extra point was good and Morenci was up 7-0 at the beginning of the second quarter.

Phoenix Christian was then threatening on its next drive but three straight procedure penalties backed up the Cougars into a 3rd-and-long situation. Encinas then mishandled the snap and Chris Roybal recovered the fumble for Morenci.

The Wildcats made the most of the turnover and were soon near the red zone after a 35-yard run by Isaac Pacheco.

On 4th down from the 16, Blair rolled to his right and completed a pass to Chris Roybal for a first down just before being tackled in the backfield. Pacheco then finished the drive with a 9-yard TD to put Morenci on top 14-0.

The Cougars struck right back, however, as Taylor got loose around the right side and tiptoed the sideline 60 yards for his first of four touchdowns on the night.

A 44-yard field goal attempt by Morenci in the waning seconds of the second quarter was short and wide right, and the Wildcats went into the locker room with a  14-7 lead at halftime.

“They’re a really good football team,” Cole said. “We knew coming in here that it was going to be a tough game. They’re running game was really good the first half and we made a couple of adjustments at halftime and slowed them down a little bit.”

Gallegos said Phoenix Christian also changed its offense at halftime and that helped its run game but that the turnovers were the main cause of the Cougars’ success.

“They moved one of their tackles over to the other side and powered to that one side, but when you’re giving up a short field bad things are going to happen,” Gallegos said. “We did a really good job, we stopped them the first time around but then the first play from our scrimmage we dropped the ball.”

The Cougars made the most of the turnover and tied the game early in the fourth quarter on a 3-yard TD run by Taylor.

Another fumble, this one during a handoff between Blair and Casillas, gave the Cougars excellent field position at the Wildcats’ 37. Taylor finished the drive for Phoenix Christian with a 2-yard TD to give the Cougars their first lead, 20-14.

After Morenci came up half a yard short on a 4th-and-4 from its own 42, the Cougars set up in the red zone after big runs by Taylor and Man-Man Freeman. Taylor then scored his fourth TD on the night with a 1-yard plunge to end the scoring at 27-14.

Gallegos said it was a bittersweet moment for him because the seniors on the team were freshmen when he first came onto the coaching staff as an assistant and that he felt they deserved the chance at playing a rematch against Thatcher, which beat them 15-0 early in the year.

“I’m super proud of our seniors,” Gallegos said. “I got to know every single one of these guys and I love them all on a personal level . . . This was the first group of kids when I got here that I worked with, so to see them come full circle and turn into fine men it makes me proud. It hurts for me because I know they deserve better. We should have had another shot at Thatcher next week and it just didn’t fall the way it should’ve. We’ll graduate these seniors with pride and get back to work.”

The Cougars (the only private school left in the playoffs) will join three 2A Black Region schools in the semifinals and will face the undefeated back-to-back state champion No. 1 Thatcher Eagles (4-0 region, 9-0 conference, 12-0 overall) at Chaparral High School in Scottsdale on Saturday, Nov. 17, starting at 6 p.m.

To reach the semifinals, Round Valley dispatched No. 6 Arizona Lutheran 49-7 and St. Johns triumphed over No. 2 Trivium Prep 47-7. The pairings show the strength of the 2A Black Region.

In that game, starting quarterback Jerick Arbizo suffered a severe injury in the first quarter and had to be taken to a local hospital.