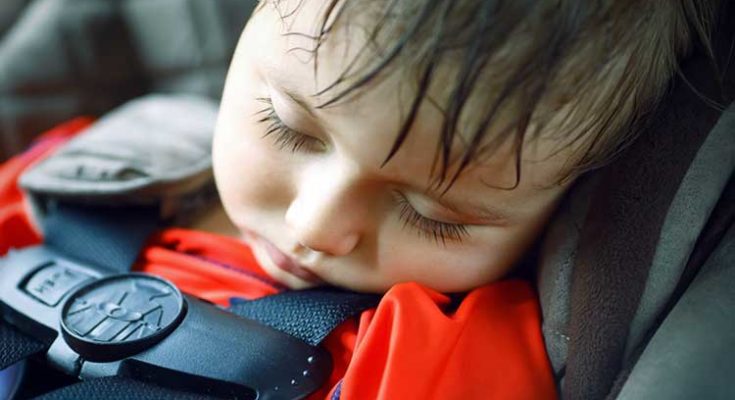 Contributed Photo: An infant in a car seat, like the one pictured here, was rescued by officers after accidentally being locked inside an SUV. (Note: This is not the child in this article)

SAFFORD – Triple digit-temperatures have hit the Gila Valley, which means being extra vigilant regarding children and vehicles.

Officers from the Safford and Thatcher police departments joined forces to help rescue a 9-month-old baby boy who had been accidentally locked in a running vehicle at Walmart on Sunday, May 6.

Officer Muenchow located a running blue, Chevy Equinox with the child in a car seat in the back. The father said he had remote started the vehicle and set his keys on the front passenger seat. The rear passenger seat was open, and the man buckled his son into his car seat. When he closed the rear door, however, the SUV automatically locked.

The father said he believed the air conditioning was on but advised that the vehicle would automatically shut off in 10 or 15 minutes and that it should shut off soon. Officer Muenchow then radioed for assistance, and Thatcher Sergeant Everett Cauthen advised he was en route with a lock-out kit.

Officer Muenchow then checked back on the baby and noticed he was starting to sweat. He noticed the window was warm and he wasn’t able to see if the air conditioning was actually running.

Officer Muenchow told the father that if Sgt. Cauthen didn’t arrive soon he would have to break the window. Just before the SUV’s engine turned off, officer Muenchow noticed the baby was now sweating profusely and was crying.

Just before busting out the window, Sgt. Cauthen arrived at the scene and used his lock-out kit to open the door. The father’s wife had arrived by that time, and the baby was placed in his grandfather’s truck that had its cool air conditioning running.

A passerby inquired if they needed assistance and said he had cold water inside a cooler. Officer Muenchow retrieved an empty bottle from the grandfather and filled it with cold water for the infant.

According to officer Muenchow’s report, the infant quickly improved and was smiling and displaying normal behavior soon after getting cooled down.

Below is a promotional video from Kids and Cars about the fatal distraction of leaving children in a vehicle.

On average, 37 children die each year from heat-related deaths after being trapped inside vehicles.

According to San Francisco State University’s Department of Geosciences, the temperature in a car can increase up to 20 degrees in 10 minutes during daytime hours and more than 40 degrees in an hour. Another study by the Texas A&M Medical Science Center lists that cracking a window has no effect on the rate of the rising temperature or a final temperature. That is due, in part to the greenhouse effect of short radiation from the sun entering the car and being turned into long radiation and heat, which remains trapped in the car.

That means even in 72-degree weather with the windows cracked, the temperature inside a car can reach 112 degrees, and vehicles parked in 100-degree weather (a common occurrence for most of Arizona this time of year) can see an interior increase to 120 degrees in just 10 minutes and can reach an easily fatal 140 degrees.

In 2015, Arizona Director of Child Safety Greg McKay performed a demonstration in Phoenix in May when the temperature outside was less than 90 degrees. McKay had a car that had its air conditioner on pull into a parking spot and then had the vehicle turned off. The temperature in the car rose from 86 degrees to 108 degrees in just 10 minutes and continued up to 124 degrees in only 25 minutes.

Thatcher Police Chief Shaffen Woods praised the officers for performing their duties well and saving the infant from serious injury and, possibly, death.

• Never leave children alone in or around vehicles

• Put something you’ll need like your cell phone, handbag, employee ID or briefcase on the floorboard in the back seat underneath the child’s car seat.

• Get in the habit of always opening the back door of your vehicle every time you reach your destination to make sure no child has been left behind.

• Make arrangements with your child’s daycare center or babysitter that you will always call if your child will not be in attendance.

• Keep vehicles locked at all times, even in the garage or driveway.

• Keys and/or remote openers should never be left within reach of children.

• When a child is missing, check vehicles and car trunks immediately.

• If you see a child alone in a vehicle, get involved. If the child is hot or seems sick, get him or her out as quickly as possible and call 911.

• Be especially careful about keeping children safe in and around cars during busy times, schedule changes and periods of crisis or holidays.

• Use drive-through services when available.

• Use your debit or credit card to pay for gas at the gas station.