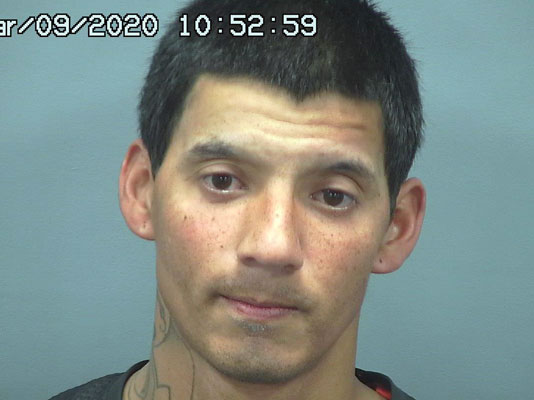 Contributed Photo/Courtesy GCSO: Arturo Luna was arrested on a drug warrant and booked into the Graham County Adult Detention Facility on March 9. He was later released Wednesday, March 18, after his charges were temporarily dropped in a likely effort to lessen the court’s burden during the COVID-19 epidemic.

SAFFORD – A keen-eyed officer spotted a man wanted on drug charges who was riding a mountain bike on 8th Street the morning of March 9. After he was arrested and booked into the jail, however, his charges were dismissed without prejudice, likely to lessen the burden of the courts during the COVID-19 epidemic.

Arturo Luna, 31, was arrested on a warrant relating to charges of possession of a narcotic drug, possession of drug paraphernalia, and taking contraband into a correctional facility. He was caught after an officer spotted him riding a bicycle and noticed his warrant.

Luna was arrested on his warrant and booked into the Graham County Adult Detention Facility on March 9, before the COVID-19 epidemic hit the Gila Valley.

On Wednesday, March 18, his charges were dismissed without prejudice by the Graham County Attorney’s Office, meaning that the charges could be filed again at a later date. Additionally, new charges of possession of drug paraphernalia for the items he was found with when initially taken into custody are also pending review by the office.

With the COVID-19 epidemic, the Graham County Superior Court is holding most of its hearings either telephonically or by video conference and during this unprecedented time court cases are being selective on what needs to come before the judge now and what can be held off to a later date. Since the case involves a nonviolent drug offense, it was likely deemed to be selected to be dismissed until a later time after the COVID-19 epidemic has run its course, and Luna was released from custody Wednesday, March 18.