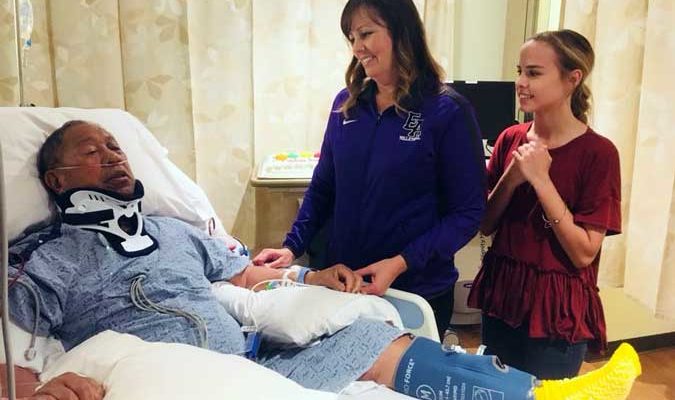 Contributed Photo/Courtesy Brent Hekekia: Injured coach Gerald Hekekia and those manning fundraisers for him both continue to make strides.

MESA – The journey of a thousand miles begins with a single step. – Lao Tzu

The Chinese proverb could not be more apt in describing not only legendary coach Gerald Hekekia’s path to recovery after being badly injured in a fall but also the fundraising efforts that have garnered together to help ease the financial pain, if not the physical.

Like a snowball rolling down a hill, the fundraising efforts and coach Hekekia both continue to gain in strength with each coming day.

According to family members, Hekekia suffered a fall in his residence at about 4 a.m. on Saturday, Jan. 6. He was transported to Barrow’s Neurological Center in Phoenix for surgery to repair his spinal cord. Hekekia also suffered nerve damage to the ligaments in his neck.

The three-hour surgery was successful, but Hekekia was unable to move his right arm or leg and had limited movement of his left arm, according to family members.

Hekekia has since been transferred to HealthSouth East Valley at 5652 E. Baseline Rd. in Mesa and has been enjoying the many visits from friends and family as he undergoes his rehabilitation.

Kainoa’s Hawaiian Grill donated food and the clubs sold around 65 plates at $10 each. The Thatcher Booster Club also made Hawaain leis for sale and New Insulation Concepts paid $200 to sponsor a halftime basketball musical chairs competition that ultimately pitted a Thatcher contestant versus one from Pima.

The way it worked was the first five people to come down to the court and donate $20 could then call out a friend to enter the competition. After a scramble, 10 contestants took part, with the winner being from Thatcher. Which was a consolation prize of sorts as Pima ended up winning the basketball game.

“Pima came through for us and had everybody there serving the food, and the Thatcher Booster Club brought the leis,” Palmer said.

The ASEAC Ribbon Club, The Polynesian Club, and the EAC Athletic Department are had an online bake sale/auction to help raise funds and were at the game with more fundraising efforts. All in all, the evening made at least $1,200 through the dinner, leis and halftime event alone, according to Palmer, who said he would have been leading fundraising efforts even if people hadn’t approached him with the idea.

“I know and love him (Hekekia),” Palmer said. “He’s been somebody I’ve known for a while.”

Hekekia is a longtime Gila Valley coach, having coached both football and volleyball at Thatcher and Pima, respectively, as well as at EAC, where he led the Gila Monsters to a national championship in 1991 as well as runner-up in 1986 and 1992. He was also named National Coach of the Year in 1992 as well as Region I Coach of the Year from 1987-1992.