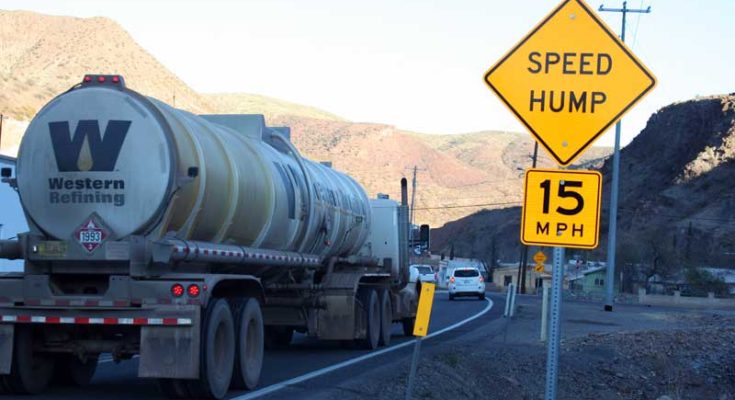 Photo By Walter Mares: A tanker truck approaches a speed hump in Clifton that slows traffic to 15 miles per hour. The hump is on U.S. Highway 191 near the Clifton Post Office.

CLIFTON – Coincidence? No doubt about it. The highway that runs through Clifton was once known as U.S. 666 “the Devil’s Highway.” The latest daily traffic count of vehicles that pass through Clifton stands at 6,660. There we go again with that “evil” triple six.

Some may find the coincidence of at least some mild interest. What is certainly relevant is that such a large number of vehicles pass through this town on what is now U.S. Highway 191. The highway is located in the narrow San Francisco River Canyon. A majority of those vehicles passing through town are passenger cars or pickup trucks. There is also a great number of huge semi-trucks that pass through.

There are not any traffic stop lights in Clifton. In fact, there is only one traffic light in all of Greenlee County. Thus,  the Arizona Department of Transportation has come up with something of a solution. It is a “speed hump” over which all vehicles are required to slow down to 15 mph. Any vehicle, especially those with low clearance, will bottom out at any speed above 15.

There are bright yellow traffic signs warning motorists about the hump and the much-lowered speed limit. There are also signs posted throughout the town that advises motorists the speed limit is 25 mph. On top of that, there are three solar-powered signs that give a readout of how fast a vehicle is traveling.

It’s basically not rocket science,” said Clifton Town Manager Ian McGaughey. “The electronic signs alert drivers to slow down to 25. In fact, that is the speed limit all through town.” The distance the highway runs through Clifton is about 2.5 miles.

McGaughey said he agrees with the choice ADOT made to locate the Speed Hump and referred to it is “a definite positive.” He pointed out that the hump is located in what can be best identified as Clifton’s “Downtown.” The highway runs by The U.S. Post Office.

The Post Office is one of the town’s busiest spots. There is no home delivery of mail and so all of the town’s residents must go to the post office to pick up their mail. It also is a social gathering place, especially for senior citizens. A common sight is people, usually older men, sitting on the bench in front of post office, visiting and perhaps catching up on the latest news about their families.

There are also three businesses flanking the post office: the Valley Telecom telephone office, the Danny Merrell insurance agency, and the Family Dollar store, which carries a wide variety of items, from clothing and food to pet supplies and general household goods. There are no supermarkets in Clifton.

Right around the corner from the dollar store is the Clifton Town Hall Complex, which houses the town administrative offices, the police and fire department’s and the town magistrate’s office. About 50 yards down the road is the Dollar General store, which, like the Family Dollar store, sees a great deal of traffic.

“The speed hump definitely slows down traffic through the busiest part of town,” the town manager said. “It addresses, to at least some degree, some safety issues. That includes issues relating to pedestrian traffic crossing from Chase Creek Street to the Post Office and surrounding businesses.”

“It’s undoubtedly a pretty busy area,” he said. “It has often been quite congested, especially around shift change time at the Morenci copper mine.” Morenci is located about four miles away from and about 500 feet higher than Clifton. The Freeport McMoRan Morenci facility is the largest operating open pit copper mine in North America.

While many mine employees live in Morenci, a great many do not. It is those who are a large part of the long line of vehicles that pass through Clifton daily on their way to and from the mine. A major part of that traffic flow includes the huge semi-trucks carrying supplies, equipment and other mining-related items to the Morenci facility. There are also semis that carry copper anodes from the mine. The anodes are large, flat and very heavy sheets of copper from the mine’s electro-winning plant.

“To say there is a lot of traffic passing through a small town like Clifton a real understatement,” McGaughey said.

Two years ago ADOT experimented with what it termed “Traffic Calming” devices to deal with the heavy traffic passing through Clifton. That mostly involved speed bumps in three or four places on the highway. The effort proved highly unpopular and was shelved. As for painting crosswalks on the highway, ADOT officials have always given the idea a big thumbs down, saying mostly crosswalks did not adequately address pedestrian safety concerns.

An effort in the late 1980s to paint a crosswalk near the Clifton Schools grounds remains legendary. Along with town officials, school officials became quite frustrated by ADOT’s refusal to establish crosswalks. Clifton Vice-Mayor Luis Montoya was at the time Superintendent of Clifton Schools. Out of his frustration with ADOT, Montoya took it upon himself to paint a crosswalk at the intersection of U.S. 191 and Hill St.

His action undoubtedly caused some consternation among ADOT officials, but Clifton residents, especially those with children in school, cheered Montoya’s effort. The talk in town was often “Hooray for Louie!”

The crosswalk remained for less than a month before ADOT painted black over the two white stripes. That drew an unfavorable response from local folks, but if nothing else, a legend was born and remains.