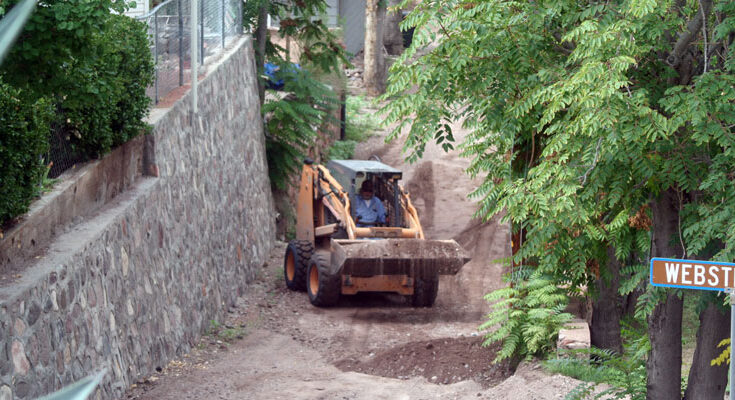 Walt Mares File Photo/Gila Herald: Jerry Valenzuela of the Clifton Public Works Department uses a front-end loader to remove a great quantity of mud from an alley in South Clifton on Aug. 21, 2021. The task is an important one, particularly in South Clifton where during heavy rainfalls mud runs down from hillsides onto streets and alleys. Work such as this is among the several duties of Public Works. A ‘Yes’ vote on Prop. 400 will ensure the police, fire, and Public Works departments will not have to cut staff. Public Works also maintains the Clifton sewage treatment plant, a very vital service to Clifton residents. It ensures Clifton residents can flush their toilets without any problems occurring.

Will have a major impact on the town’s budget

CLIFTON – There are a great many folks who feel that ‘big government is too intrusive on their lives. In Arizona, that is the case for every city and town in the state. It will especially affect small towns such as Clifton.

It is able to do so by adopting Home Rule, which the town has had in effect for 18 years.

Home Rule is coming up for a vote again, which happens every four years. Home Rule is again totally up to Clifton voters. The election day is not far away. It is on Aug. 2 and will be held at the Clifton Train Station.

Montoya explained, “The state of Arizona imposes a formula-based budget spending on all Arizona cities and towns. This formula-based spending limit does not take into consideration the services and programs provided to citizens by each city or town.”

The mayor said Home Rule is an alternative that allows Clifton to spend the money it collects from taxes and other sources. It is the town’s council that decides what local services are needed in the community instead of state lawmakers making those decisions.

Without Home Rule, the state will be dictating Clifton’s budget through the 2026-2027 fiscal year.

Clifton Vice-Mayor Laura Dorrell addressed how allowing the state to determine Clifton’s budget will affect Clifton. Among those are the effects on the police and fire departments and public works. It would also affect the town’s abilities to apply for and receive grants. An example is a recent grant the police department received for equipment from the Arizona Governor’s Office. Another important grant source is the Arizona Department of Transportation.

“Public works does a great deal of maintenance around town, much of which may go unnoticed but is essential,” said Dorrell. “Take for example the town’s sewage treatment plant. It’s a vital service provided by Public Works.’