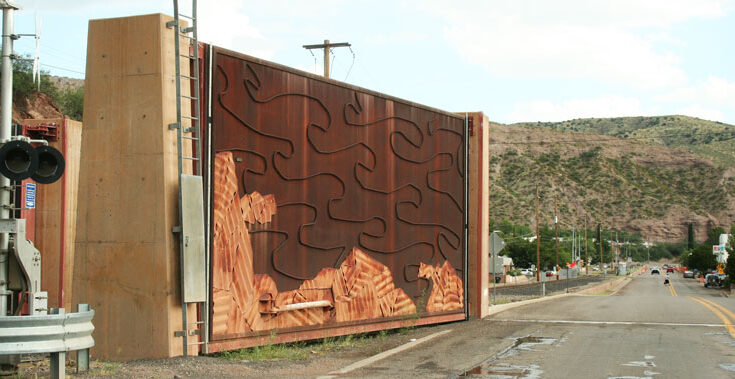 Walt Mares File Photo: This is one of the two giant flood gates, about 15 feet tall, located along U.S. 191 on the south bank of the San Francisco River in Clifton. They are part of a levee system to prevent flooding in South Clifton such as occurred on Oct. 1-2, 1983. It was the first time in anyone’s memory that South Clifton was flooded. Huge cottonwood trees were stuck under the highway bridge forming a dam and causing flood waters to flow into that part of town. At the time the highway was U.S. 666.

CLIFTON – The giant gates have been there since 1994 and they still work in the event a flood such as the one of 1983 occurs again. The San Francisco River in Clifton jumped its banks in what was considered a 100-year flood.

The gates closed successfully on Tuesday, Sept. 27. The Clifton Public Works Department used a front-end loader to close and then reopen the gates. Town of Clifton officials say they do not want any unexpected surprises in the event there is a malfunction, and the gates may somehow become jammed and cannot be closed. After all, the gates have been in place for 28 years.

The testing occurs twice a year.

The giant gates, which locals refer to jokingly as the “Jurassic Gates” are meant to keep flood water from pouring into South Clifton. That part of town was inundated with flood water during the Great Flood of 1983. Many homes and businesses were badly damaged or destroyed by flood waters that were as much as 10 feet deep.

During the testing, U.S. Highway 191, (which used to be U.S. 666) was closed to southbound and northbound traffic for less than 20 minutes.

The practice, such as that on Sept. 27, was scheduled for when it would not pose an obstacle to vehicles passing through Clifton during a shift change at the nearby Morenci copper mine. Mine-related traffic accounts for most of the 6,000 vehicles that pass-through Clifton daily. Also, U.S. 191 is the only traffic route to enter and exit Clifton.