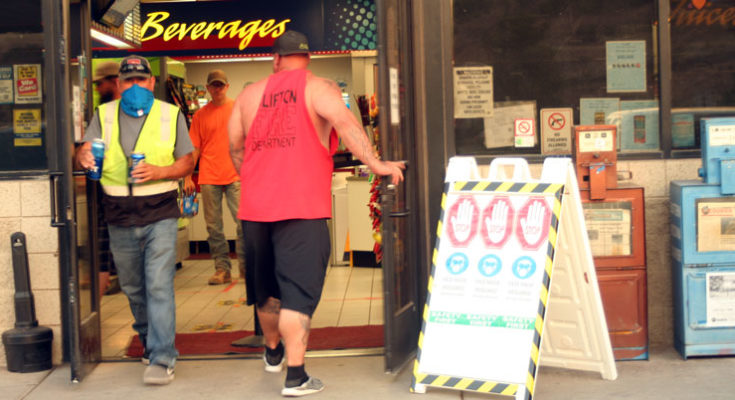 Walt Mares Photo/Gila Herald: A man wearing a protective face mask exits the Morenci Conoco store while another man not wearing a mask enters, ignoring a sign that reads masks are mandated to enter. The Conoco lies within the town limits of Clifton, which recently adopted a law mandating people wear masks when in public places. Many wrongly believe the store is not within the town limits. That included the man entering the store who was adamant he believed the store is not part of Clifton.

Will FMI step in to ensure compliance?

The solution to the disagreement of whether the Morenci Conoco is or is not located within the town limits of Clifton is answered with a definite yes.

Indeed, the Conoco is located within Clifton’s town limits. What raised the question is a new mandate by the Clifton Town Council that requires people to wear protective face masks when they are in public places, particularly in businesses. They must do so if they are entering a place such as the Conoco convenience store and gas station.

The establishment is owned and operated by Freeport McMoRan Inc., the global mining giant. The Conoco is the only convenience store and gas station in Morenci.

In Arizona, the number of virus cases is skyrocketing. Greenlee County has the least amount of reported COVID-19 cases in Arizona. Besides being the second smallest in are among Arizona’s 15 counties, it also as the smallest population, an estimated 9,000 souls. However, the number of Greenlee cases has doubled over the past two weeks, from nine to 18. Clifton town officials point out that because of Greenlee’s small population, the number of cases doubling in such a short period is quite significant.

There is a large sign at the entrance of the Conoco alerting people of the face mask requirement. So far, several people are ignoring it. They believe the Clifton mandate that went into effect at 5 p.m. Friday, June 26, does not apply to the facility. It certainly does.

The idea that the Conoco does not lie within Clifton can be easy to understand. The store is high on a hill adjacent to most of Morenci, an unincorporated community. Clifton proper is located in a canyon, about 400 feet below Morenci. However, Clifton’s town limits reach high into parts of Morenci that include the Conoco.

In fact, the Morenci Public Schools campus is also within the Clifton town limits.

The Conoco enjoys substantial business as it is the only convenience store and gas station in Morenci. Most of its clientele are copper mine employees or their families. The miners are employed at the Freeport McMoRan, Inc. open-pit copper mine. It is huge and is the largest operating open-pit copper mine in North America.

FMI strongly emphasizes safety in its Morenci Operations. One could say “Safety First” is an FMI motto. The large red and white sign in front at the Conoco’s doors advises customers they must “Stop” and wear face masks before entering the store.  The bottom of the sign, in green and white, says “Safety First,” echoing FMI’s motto.

Obviously some people do not look closely at the sign or just choose to ignore it.

Susan Breen, who frequents the store, said she hopes that because of its strong reputation for safety first, FMI will step in to ensure that Conoco customers do wear protective face masks before entering the store.

She said that simply put, wearing a protective face mask beats the possibility of severe illness or death. The possibility is real, especially with the alarming increase of virus cases in Arizona.

An older man who buys his daily pack of cigarettes at the Conoco said the store is “very strict” about making cigarette buyers produce an ID to prove they are at least 21 years of age. “That’s even if you look a lot older than 21, like me. It’s state law so you gotta do that and it’s store policy. Okay, now it’s the same with the new Clifton law.

So why not do the same thing with masks. I mean it’s a hell of a lot healthier to wear a mask than smoking.”