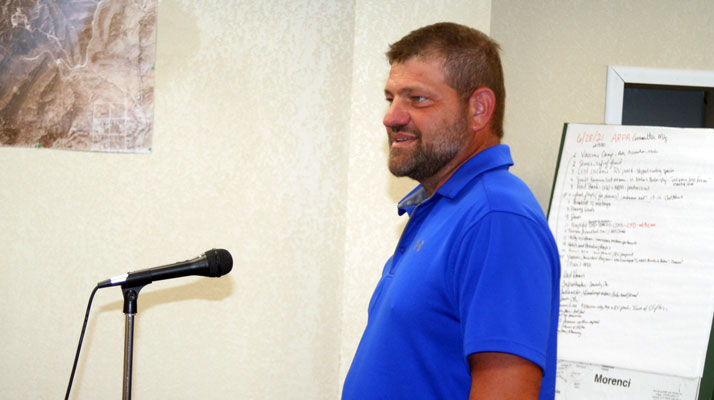 Walt Mares Photo/Gila Herald: Lee Ketterman answers questions at a Town of Clifton Board of Adjustment hearing on Aug. 4. The board gave its unanimous approval for Ketterman’s company, Clifton Bakery LLC, to proceed with work on a recreational marijuana dispensary site in South Clifton. The town is allowed two have two separate dispensary licenses. There were several parties interested in obtaining the licenses from the State of Arizona. It was the state, not the town, that decided who would receive the licenses.

Adjustments board gives big thumbs up

CLIFTON – Ah, how times have changed since the previous decade. This time it was smooth sailing for the future of The Clifton Bakery, a recreational marijuana dispensary located in South Clifton.

According to its owner, Lee Katterman, the bakery will open for business by late August.

The Town of Clifton Board of Adjustment gave a unanimous go-ahead for work on the building to continue. The board gave its approval at a special hearing at Clifton Town Hall on Wednesday, Aug. 4. There were no objections from members of the public. In fact, although the session was publicized, one man was the only member of the public who attended.

The session was in stark contrast compared to the previous decade when medical marijuana dispensaries were approved by Arizona voters. The town council approved the location of one such facility on Chase Creek. That drew a one-man firestorm from a local businessman who accused the town of being a drug cartel.

This time around, Arizona voters approved the sale of recreational pot. Clifton drew a great deal of attention from potential entrepreneurs, particularly from Tucson and Phoenix.  The town was allowed to have two recreational cannabis sales facilities. In fact, there are only two allowed to be located in Greenlee County. The county government and the town of Duncan declined to apply. Whereas Clifton let it be known it would gladly accommodate such facilities.

The competition was incredible for Clifton’s slots. However, the town had no say-so as to who would be awarded the licenses. That was totally determined by the State of Arizona which used a lottery system to award licensees.

No doubt revenue for the town’s coffers will greatly benefit from the sales tax income. Clifton is in need of much infrastructure repair and improvement. For example, some of the town’s sewer lines are old and in need of replacement.

Road and other equipment are sorely in need of replacement.

At the special Board of Adjustment session Board, President Victoria Harriman and members Joann Vozza and Melissa Montoya all made positive comments about Clifton Bakery owner Lee Katterman. Among remarks from board members was that Katterman had followed all requests for information and kept the board totally apprised about the business’s efforts and progress.

Town manager Rudy Perez also commented on how Katterman has been so cooperative and easy to work with.

Look for story updates on the Clifton Bakery, including the history of the building which is more than a century old.