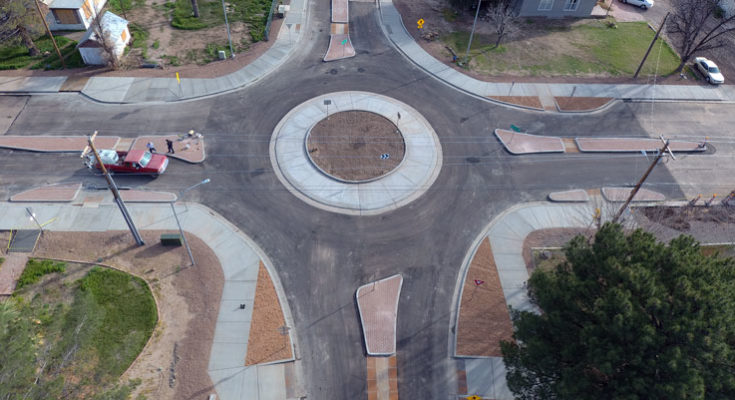 THATCHER – The Church Street roundabout which is a feeder into and out of Thatcher High School at High School Avenue opened to traffic Thursday.

The intersection of Church Street and High School Avenue had been closed for the project and school traffic was previously diverted onto First Avenue, where a temporary 15 mph school zone was created.

According to Thatcher Town Engineer Tom Palmer, the Church Street roundabout is exactly the same size as the town’s first roundabout placed in the multi-street intersection of Daley Estates of Golf Course Road, Reay Lane, Hoopes Avenue, and Robinson Avenue. Graham County is also constructing a roundabout at the three-way intersection of Eighth Avenue, Safford/Bryce Road, and Airport Road. According to Graham County Town Manager Dustin Welker, the county’s roundabout will be much larger to accommodate large traffic for the nearby Safford Operations mine of Freeport McMoRan Inc.

The Church Street roundabout is part of a $2.5 million street renewal project that includes widening the street with completely new asphalt from curb to curb, new sidewalks, curbs, and gutters to provide better water drainage, parallel on-street parking and bike lanes on both the southern and northern sides.

“Drainage improvements were one of the primary reasons we did the job in the first place because of how bad Church Street got when it rained – muddy and nasty and nowhere for the water to go,” Palmer said.

The water will now continue northbound down the side streets and not pond in the middle of the road. The goal is to push the water toward existing farm ditches and existing drainage areas.

According to Palmer, the base road is complete and the final surface paving will take place over the next two weeks with the east side being paved next week, followed by the west side. After the final coat of asphalt is complete, the road will be stripped and the final cement work and landscaping should be complete by mid-April, Palmer said.

Hatch Construction out of Taylor, Arizona, built the roundabout, and the town is now working with a landscape architect to come up with a design for what to go in the middle of the roundabout with the Town Council suggesting a large statue of an eagle. However, no final design has yet to be approved.