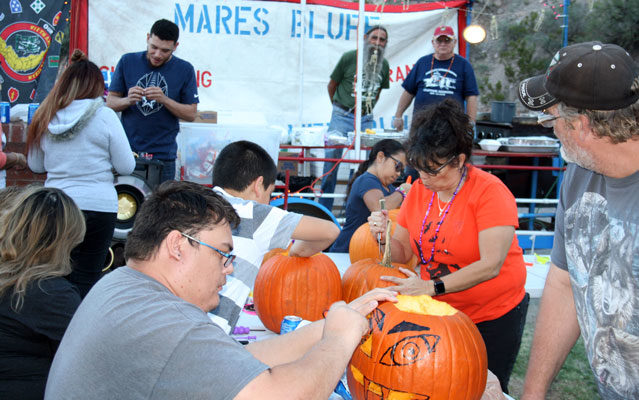 Photo By Walt Mares: Manuel Sanderson, foreground at left, works at carving a pumpkin while dad Scott Sanderson, far right, stands ready to assist if needed. The pumpkin carving contest had a strong attendance of children, parents, and grandparents. That was manifested by the 200 free hot dogs that were consumed. The event was sponsored by the Mares Bluff Veterans Memorial Committee. The contest was held Oct. 27, at the Clifton Train Station. Bluff committee members Steve Guzzo and John Freida, who cooked all of the hot dogs, are on a platform at the rear.

CLIFTON – Imagination was a big part of it. Everyone, children and parents,  all seemed to be having a blast. It was a pumpkin carving contest at which youngsters keenly focused on their creations. There were times a mother or father stepped in to provide some guidance or a bit of muscle to carve through a pumpkins thick skin.

For safety reasons the knives used for caring were not very sharp, adding to the need for parents’ assistance.

Overall it was a fun family event sponsored by the Mares Bluff Veterans Memorial  Committee and was held Saturday afternoon, Oct. 27, at the historic Clifton Train Depot  It was a prelude to Oct. 31, the night of Halloween.  On top of fun, there were free hot dogs, sodas and chips. Around 200 hot dogs were cooked and served by committee members Steve Guzzo, John Freida, and R.T. Jackson.

Manuel Sanderson, Morenci, worked hard on his creation and dad Scott Sanderson gave him an occasional helping hand. Among the many others engaged in creations were Emily Dominguez, 9, Morenci, and little Jayliana Guzzo.

The carving started in the later afternoon and lasted into the early evening. Plenty of night was provided when the sun set.

Coinciding with the pumpkin carving was a fun touch of terror in the train depot itself. It was the Haunted House provided by the Clifton Police Dept. It has been, and is, organized by Delfina Pilgrim, the department’s head administrative assistant. Judging by the screams and laughter emanating from Haunted House, it was once again quite a success.

Pilgrim wore a smashing black costume portraying a witch. Her outfit was very detailed, from her shoes to a sharply pointed hat.

Assisting Jernigan were Ella Jernigan and Stormie Wright, who also played key roles with their colorful outfits. Jernigan’s was dressed as the Queen of Hearts. It was brightly colored and included several sparkling red hearts. Wright wore a light blue outfit that made her look every bit like a beautiful warm-hearted fairy.

A scary creature ran about prior to becoming one of the scary characters in the Haunted House. His very white face contrasted sharply with his black clothing. To say his face was ugly and frightening would be something of an understatement.

The spook was Quentin Jernigan. His father, Evan Jernigan, looked at him with a mock gesture of fright.

The pumpkin carving contest was unlike anything held in Clifton in recent years. There was not much time to advertise the event but that did not result in a lack of participation. It was one of many community activities provided throughout the year by the Mares Bluff Veterans Memorial Committee. “The bottom line it was something for the community to get together and enjoy,” said Steve Guzzo of the bluff’s committee. “I think everybody had a really good time. It was really neat to see children and their parents doing and enjoying something together.”

One particularly special project the committee sponsors in raising money for scholarships awarded to Duncan and Morenci high school graduates. Veterans Park, open to the public, has undergone major improvements thanks to the bluff committee. It is one of historic Clifton’s showpieces. It includes construction of a ramada that provides shade for those who wish to enjoy a picnic.

Two beautiful stone monuments, with accompanying plaques, honoring U.S. armed forces veterans from Greenlee were erected earlier this year at Veterans Park. The memorials are made of native stone. They were built by a local stone mason.

“It’s a matter of having pride in the Greenlee County community and honoring the many veterans from Greenlee,” Guzzo said.