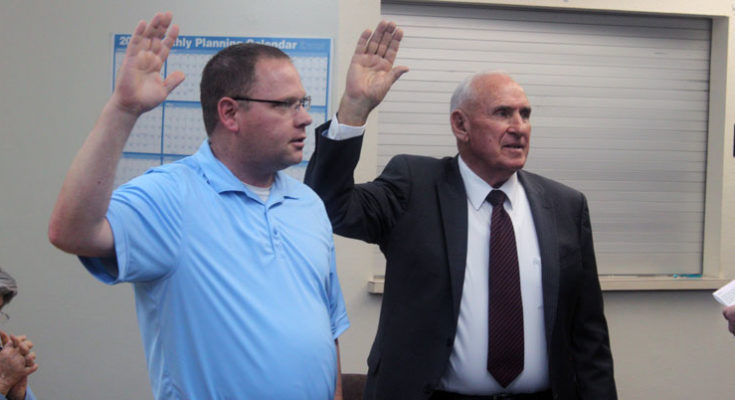 Jon Johnson File Photo/Gila Herald: From left, new Pima Mayor Dale Rogers and former Mayor C.B. Fletcher take the oath of office in 2019. Fletcher stepped down as mayor and Rogers was selected by a vote of 4-1 to take up the mantle. Fletcher will remain on the council for the duration of his term.

Longtime Vice-Mayor takes a turn in the hot seat

PIMA – The gavel has been passed as C.B. Fletcher stepped down as Pima Mayor during the Pima Town Council meeting Tuesday, Jan. 4, and the council elected longtime Vice Mayor Dale Rogers as the new Pima Town Mayor.

The vote was 4-1 to approve Rogers as mayor, with council member Sherrill Teeter casting the lone vote against. Teeter was then unanimously selected as Pima’s Vice Mayor after council members Debra Barr and Lucas Hoopes declined nominations.

Rogers was initially appointed to the Pima Town Council in September 2013 to fulfill the last year of former council member Sherri Rozzell’s term. Rogers was selected by the council as its Vice Mayor in December 2014. His seat will be up for election in 2022.

Fletcher was initially appointed to the Pima Town Council on Feb. 4, 2016, to take up the final year of former council member Don Carter’s term after Carter moved. The following year, in January 2017, Fletcher was selected by the council as the town’s mayor.

While Fletcher – who was raised in Pima, attended and graduated from Pima schools, and served as the Pima Police Chief from 1994 – 2001 – stepped down from his position as mayor, he is still serving his term on the council. He is just beginning the second year of his third, four-year elected term.

The council has had numerous contentious sessions over the past nine months with council members Sherrill Teeter and Lucas Hoopes calling for more transparency in the town’s dealings and increased vigilance for the adherence to the town’s codes.

The friction on the council eventually led to the resignation of former Pima Town Manager Sean Lewis. Current Pima Town Manager Vernon Batty was hired in September and sworn in as manager in October to help right the ship.