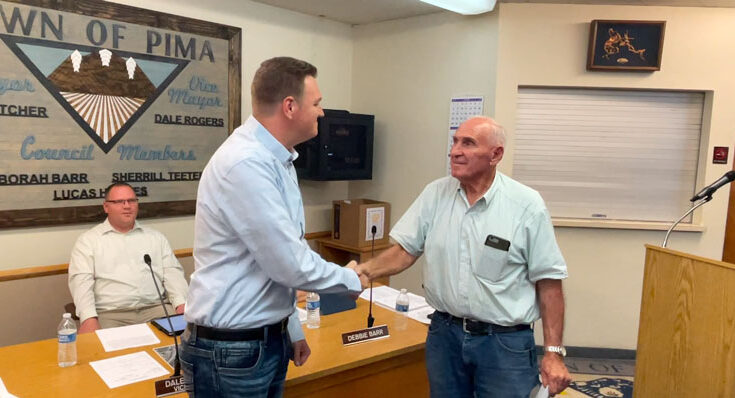 PIMA – The Vernon Batty era has begun as he was officially sworn in as Pima Town Manager at Tuesday night’s Pima Town Council meeting.

Pima Mayor C.B. Fletcher performed the ceremony and was the first to welcome Batty aboard.

“We’re really excited about it,” Fletcher told the Gila Herald. “I think he’s going to do a great job. He’s jumped right in and he’s already met with the other town managers and county manager to get some information and some help and he knows that he can go to them for anything at all.”

It was a packed room in the cozy Pima Town Hall to witness the event. After the meeting, Batty told the Gila Herald that he felt a sense of relief from going through the process.

“It feels good,” he said. “It feels like they can’t change their minds now. It’s official. It’s been good. It’s been two days, but, so far, I’m actually enjoying it.”

Batty was mostly quiet throughout the meeting as it was only his second day on the job, but he said he looks forward to learning what his duties are and continuing the economic development efforts started by his predecessor, Sean Lewis, and looks forward to working with the Planning and Zoning Committee on creating an Industrial Zone in the southwestern area of town near the Vard Lines Memorial Roping Arena.

“I think it’s a good idea to have one,” he said. “As of now, Pima has no Industrial Zone. So, it’s good to have a zone specified for that type of industry here. I’m glad that we are taking the steps to do it right – backing up and letting Planning and Zoning take a look at it. So, that’s progress in my mind.”

Jimmy Lofgreen with Planning and Zoning made a presentation to the council during the meeting and said they will be working on the process but that he didn’t think it would be completed by the end of the year. Certain stages must be followed through, including creating the new zone in the town code, allowing for public comment on the proposed zoning change, and at least two readings at council meetings.

With the most recent bit of friction among the council members, Fletcher believes the infusion of Batty as the town manager will help bring the group back together in a more effective fashion.

For his part, Batty thanked those who have supported him in his new endeavor.