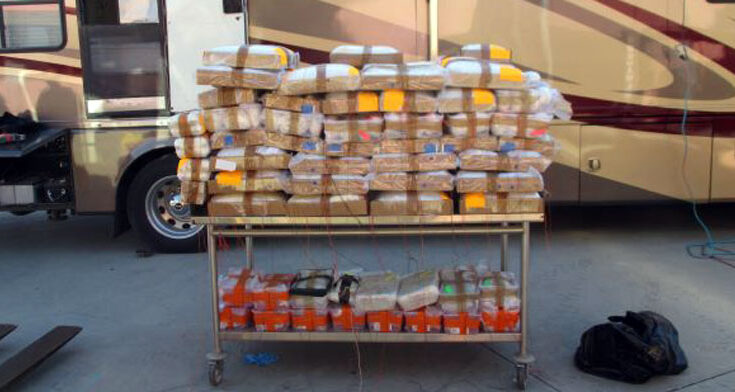 Contributed Photo/Courtesy U.S. Customs and Border Protection: Nearly 880 pounds of meth and more than 110 pounds of suspected fentanyl were seized at the Mexico border hidden in an RV on Monday.

Monday morning, CBP officers at the Port of Lukeville referred a 47-year-old Phoenix man for additional inspection of his 2008 Roadmaster RV as he attempted to enter the U.S.  Following a positive alert by a CBP narcotics detection canine to a scent it is trained to detect, the search led to the discovery of 129 packages of drugs hidden within the roof-mounted A/C unit. The drugs were determined to be a combination of methamphetamine and fentanyl, worth nearly $4.4 million dollars.

Officers seized the drugs and vehicle, while the subject was arrested and then turned over to U.S. Immigration and Customs Enforcement’s Homeland Security Investigations.

Port Director Peter Bachelier praised his team for the excellent seizure. “Our CBP officers remain focused on their mission of protecting our nation’s borders and keeping dangerous drugs from reaching our communities.”

Federal law allows officers to charge individuals by complaint, a method that allows the filing of charges for criminal activity without inferring guilt. An individual is presumed innocent unless and until competent evidence is presented to a jury that establishes guilt beyond a reasonable doubt.