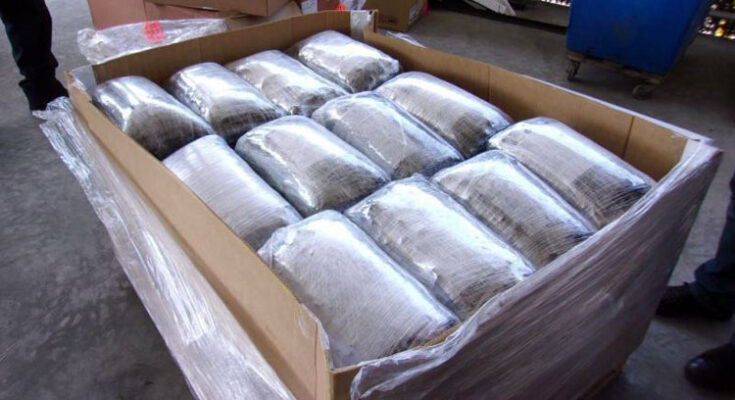 On Saturday, May 15, at approximately 9:45 a.m., a driver entered the Otay Mesa Commercial Facility with a tractor-trailer shipment.  The cargo was manifested as various medical supplies.  A team of CBP officers was roving through the lanes of trucks that had entered the port and were waiting for their inspection.  One CBP officer targeted the truck, driver, and shipment for a more intensive inspection.  The officer referred the driver, truck, and shipment for an x-ray screening.

CBP officers screened the truck using the port’s imaging system and found anomalies within the cargo shipment.  The truck was moved to an inspection dock where a CBP officer with a canine screened the boxes of cargo; the dog alerted to one of the pallets of medical products.  Officers offloaded the shipment and discovered 120 packages comingled with various medical supplies.CBP officers extracted approximately 2,425 pounds of methamphetamine worth an estimated $5.5 million.  CBP officers seized the narcotics and conveyance.  The driver, a 29-year-old Mexican male, was arrested and turned over to U.S. Immigration and Customs Enforcement, Homeland Security Investigations. The driver is facing federal charges and has been transported to the Metropolitan Correctional Center.

“Most of what CBP officers see every day is legitimate travelers and legitimate cargo that needs to speed its way into the U.S. as a critical part of our economy,” said Anne Maricich, acting CBP Director of Field Operations in San Diego.  “But CBP officers know that we must remain vigilant; transnational criminal organizations will attempt any avenue they can think of to try and smuggle their illicit drugs into the U.S.”

Criminal charges are merely allegations.  Defendants are presumed innocent unless proven guilty in a court of law.

CBP officers at the border crossing in Southern California stop illegal activity while processing millions of legitimate travelers into the United States.