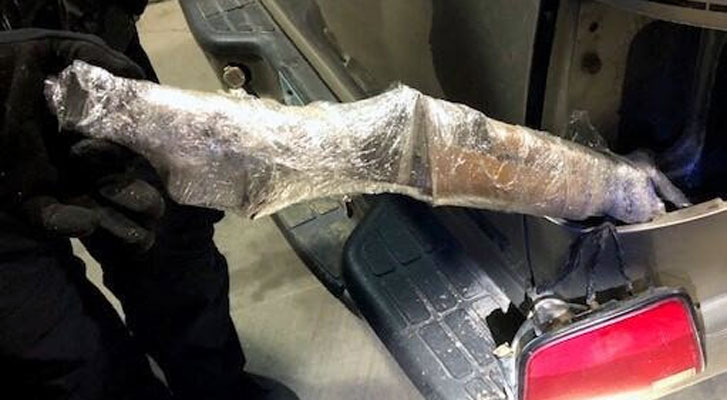 Contributed Photo/Courtesy U.S. Customs and Border Protection: An agent recovers a seized AK-47 assault rifle that was found behind a vehicle’s tail light.

The seizure occurred on the evening of Aug. 28, at the DeConcini Port of Entry in downtown Nogales when officers assigned to outbound operations selected a tan 1999 Chevy S-10 pick-up truck traveling to Mexico for inspection. The vehicle was referred for a non-intrusive imaging examination where anomalies could be seen in the rear quarter panels on the left and right sides of the pick-up bed. Upon removal of the taillight assembly of the vehicle revealed multiple cellophane-wrapped packages and socks filled with loose ammunition.  Upon further physical inspection of the vehicle, four AK-47 rifles, four AK-47 bolts, four AK-47 bolt covers, four AK-47 bolt springs, six AK-47 ammunition magazines, and 889 rounds of ammunition were discovered hidden throughout the vehicle.

The weapons, magazines, and ammunition were seized by CBP OFO officers.