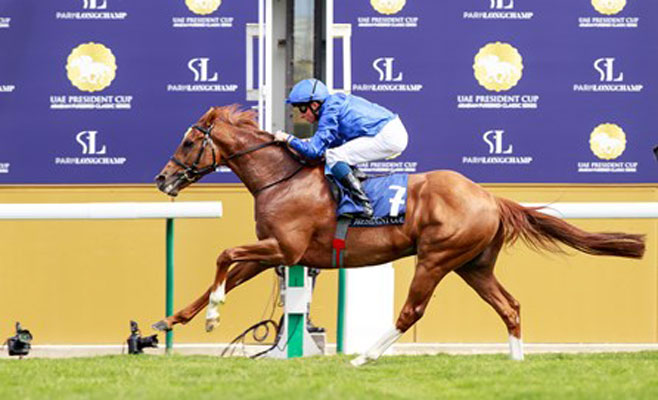 There will be a number of returning winners from the Breeders’ Cup 2021 at Keeneland this year.

One of the most controversial winners from the event at Del Mar last year was Modern Games. He was crowned the winner of the purse money in the Breeders’ Cup Juvenile Turf but was removed for betting purposes after a mishap at the stalls.

Modern games is back on track

It has been a slightly difficult season for Modern Games, as the three-year-old has needed to compete with Baaeed for much of the top prizes.

However, the three-year-old did deliver a strong bid against the top-rated horse in the world at Goodwood in July, as he finished just under two lengths behind Baaeed in the G1 Sussex Stakes. But, Modern Games often saves his best performances for his trips to North America, and that was evident at Woodbine in late September.

It was a stunning performance from the Appleby runner in the G1 Woodbine Mile, as he left his rivals trailing in his path. The closest finisher to the multiple-time Grade 1 winner was Ivar, who finished over five lengths behind.

Nonetheless, he wasn’t able to warm up for the Mile with a victory, as she was beaten G1 Queen Elizabeth II Stakes at Ascot, as he finished a length and a quarter behind Bayside Boy. Regardless, he remains an extremely likely contender for the connections of last year’s winner of the Mile.

Bayside boy could be bound for the stateside challenge

Bayside Boy could be one of the most interesting contenders in the Breeders’ Cup Mile this year, as the three-year-old has really grown into the season. His campaign started with a humbling defeat over a mile at Longchamp, as he finished 13 lengths behind Modern Games.

Though, his campaign came full circle at Ascot earlier this month, as he finished over a length clear of Modern Games, despite being sent off as a huge 33/1 outsider.

That was by far his biggest victory to date, as his only previous victory this term came in listed company at Sandown, as he beat Sweet Believer by a length and a half over a mile. There could be a growing sense that he is still improving, and his victory at Ascot firmly puts him in the mix for the Mile at Keeneland.

While the field for the Mile is stacked full of high-quality runners, the betting is currently headed by Kinross.

The five-year-old will likely be the runner for Frankie Dettori in the Mile this year, with the legendary jockey looking for his second victory in the race. Ralph Beckett will be looking for a first success, but his chances are incredibly strong based on the performances that we have seen from this runner throughout the season.

All his runs this season have come over distances between six and seven furlongs, but he looks more than ready for this return to a mile. He comes into the Mile after winning his previous four, which include big graded victories in the G1 Prix de la Foret and G1 British Champions Sprint Stakes.

However, the big concern would be the step up to a mile, as he is still unproven in this grade over this trip. His last effort over an extended distance came at Meydan in February 2021, as he finished sixth in the G1 Al Rashidiya. But, if anyone can mastermind a Mile victory, then it’s Dettori.