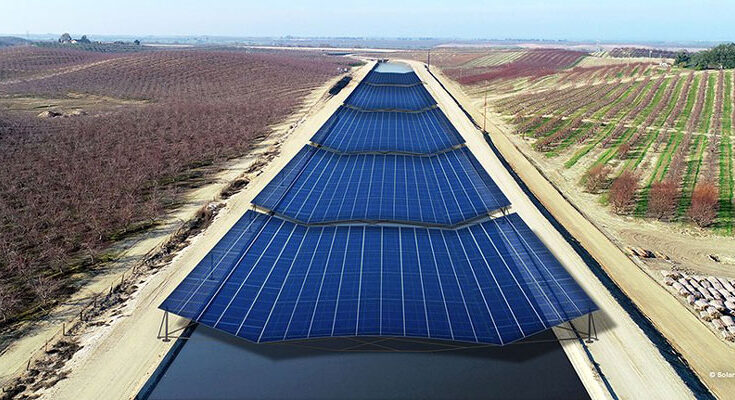 TURLOCK, Calif. – As the most persistent drought conditions on record continue to grip the Southwest, a pilot project in California’s lush Central Valley looks to save water and increase energy efficiency.

The Turlock Irrigation District, the California Department of Water Resources, and university researchers are working together to build solar-panel canopies over existing canals to test and study the benefits of saving energy and water. They’ll break ground this fall on Project Nexus, which focuses on three sections of the district’s 250 miles of canals.

The district says canal water should cool the solar panels, increasing their efficiency, while the canopies will shade the water and protect it from wind, lowering evaporation while reducing aquatic growth that harms water quality.

But what works in the Central Valley is impractical in Arizona, according to water experts in that desert state, who say the costs would be too high and the savings too low.

The Turlock pilot program is expected to be completed in 2024. But a 2021 study by researchers in the University of California system concluded that if all 4,000 miles of California’s irrigation canals had solar canopies, 63 billion gallons of water could be saved from evaporation each year.

In addition to water savings, said Brandi McKuin, a postdoctoral scholar with the University of California, Santa Cruz and one of the study authors, the panels also should enhance electricity production, possibly increasing it by 3%.

“There’s a thermal threshold on solar panels – if they become too hot, they have a decline in performance,” she said. “Because water heats up more slowly than land, we estimate there could be an increase in efficiency in solar panel electricity.”

Using the Turlock Irrigation District’s existing canals rather than purchasing land and digging new canals has both financial and ecological benefits.

“By using already disturbed land,” McKuin said, “we can avoid habitat loss, degradation, and fragmentation. So, there are tremendous benefits for biodiversity using this approach, as opposed to taking up large tracts of desert.”

Josh Weimer, the external affairs manager at the irrigation district, said that because the land value in California is high, purchasing new land would have driven up the project’s cost.

Project Nexus is the first solar canal project in the U.S., but India was the first to experiment with such panels. Since 2015, when panels were first used on a large scale in the Vadodara district of Gujarat, India, has expanded its solar canals to include a 100-megawatt project in the Narmada River Basin, which empties into the Arabian Sea on the country’s western coast.

McKuin said the California project has similar ambitions, however, the University of California research team will use a slightly different design.

“We’re thinking about really optimizing that solar canopy design so that it’s lighter weight and more efficient,” she said.

Although California researchers are optimistic about the project’s possibilities across the Southwest, geographical challenges and high maintenance costs in Arizona and other states outweigh the benefits of solar panels over canals, according to Darrin Francom, the assistant general manager of operations, maintenance, and engineering for the Central Arizona Project, which brings Colorado River water to parts of the state.

The location of CAP canals is part of the difficulty in installing solar canopies, he said.

“A majority of the Central Arizona Project canal is in extremely rural areas, and some areas where there’s nothing around it for 50 or 100 miles,” Francom said. “That’s a real challenge for a solar system because you have to be able to connect it to (an energy) transmission system, and the transmission projects are very expensive.”

Researchers at UC Santa Cruz say the main benefit of solar-covered canals is to reduce evaporation; Francom estimates the CAP system loses about 2% of its water to evaporation annually.

“The added cost of solar over the canal isn’t offset by the savings of water,” he said. “Our water saved from a financial perspective is quite a bit less than the cost to do the solar.”

The 336-mile Central Arizona Project canal, which provides 80% of the state’s population with water, was completed in 1993 at a cost of $4 billion. A Bureau of Reclamation study found that placing photovoltaic panels over the canal would be about 24% more costly than putting panels next to the canals.

Even so, Weimer thinks the Turlock Irrigation District Project will show the potential of using solar panels over canals in California and beyond.

“Because of how small the pilot is, we don’t really anticipate that evaporation savings to really be something that we’re going to see in TID with this pilot program,” Weimer said. “But what we’re hoping is that the data that the researchers are able to gain will prove the scalability possibilities.”