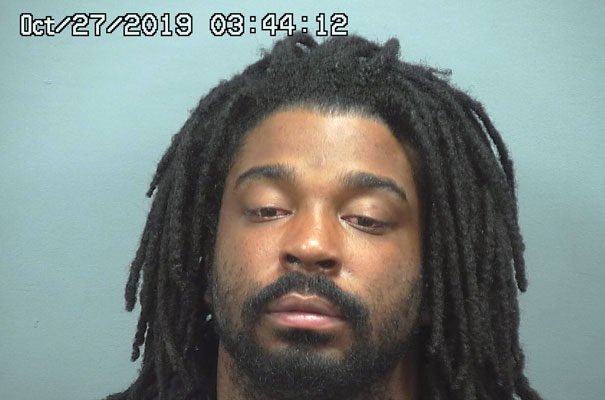 Contributed Photo/Courtesy GCSO: Jermall Hardy was booked into the jail on a charge of misconduct involving weapons after being pulled over for a traffic violation. He is also under investigation for DUI.

SAFFORD – A California man was pulled over Saturday, Oct. 26, at about 10:30 p.m. after an officer witnessed two vehicles pass another vehicle by entering the turn lane on U.S. Highway 191 South near Lebanon Road.

The Officer caught up to the vehicles and came upon a white sedan driven by Jermall Hardy. Upon contact, the officer noted a smell of burnt marijuana and that Hardy showed signs of being under the influence of the plant.

The second vehicle’s occupants did not show any signs of impairment and were released with a warning.

Hardy didn’t have a valid driver’s license and only produced a California Identification Card. Both Hardy and his front-seat passenger, Johvanni Jackson, allegedly admitted to smoking weed but said they had done it earlier and were no longer high. However, the officer noted that the car smelled as if cannabis had recently been smoked in it and nobody advised they had a valid Arizona Medical Marijuana card. Hardy also allegedly admitted to having a shot of liquor earlier in the day.

Hardy, Jackson, and a rear-seat passenger all denied having any weapons in the car. However, during a search, the officer located a loaded, black SCCY 9-MM handgun and a .380 Taurus firearm without a magazine but several loose .380 rounds were found in the door panel.

Hardy, who is a prohibited possessor due to multiple previous felonies, including robbery, assaults, burglary, and thefts, admitted the 9-MM handgun was his. He advised that he believed his felonies had been downgraded to misdemeanors and that he could possess the weapon.

Jackson allegedly admitted the Taurus was his and said he initially advised there were no weapons because he was simply following Hardy’s lead after he said there wasn’t any in the car.

Hardy and Jackson were both placed under arrest and the car was turned over to a sober driver who arrived at the scene. Jackson was initially taken to the Graham County Adult Detention Facility but was given a misdemeanor citation for failing to notify the officer about the handgun when asked and was released.

Hardy was taken to the Safford Police Department, where a sample of blood was taken for DUI-testing purposes. DUI charges are pending the results of the test and review by prosecutors.

Hardy was then booked into the jail on a charge of misconduct involving weapons/prohibited possessor.