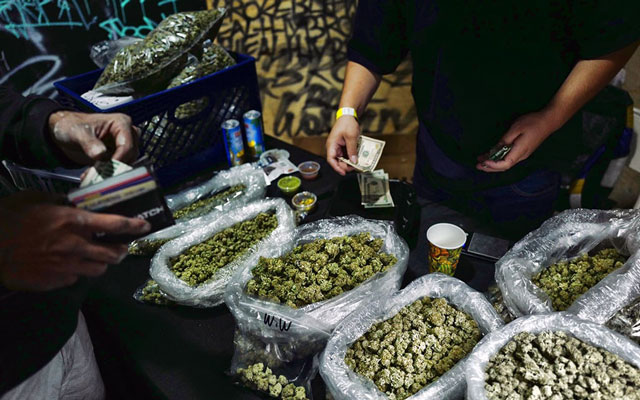 Photo By Richard Vogel/AP/Shutterstock: A vendor makes change for a cannabis sale at a Los Angeles marketplace in this photo from 2020 when Arizona legalized the recreational use of marijuana. Since then, cannabis sales in Arizona have surged to an estimated $1.6 billion, second only to California, but production in the state still lags.

WASHINGTON – Sales of marijuana in Arizona soared to $1.6 billion in 2021, just one year after recreational pot was legalized in the state, making Arizona second only to California for retail sales that year, according to an industry research group.

But while retail sales of cannabis are strong, the crop is far from being added to the traditional “5 C’s” of Arizona’s economy, experts say, as production still trails far behind other states.

They say cannabis could become a strong part of the state’s economy in the next few years, but the industry will first have to overcome barriers to growth nationwide that include limited trade and restrictions on financing for a crop that is still illegal on the federal level.

“We don’t see SWAT teams busting in the doors of dispensaries,” said Aaron Smith, CEO of the National Cannabis Industry Association. “But we do have problems with not being able to take tax deductions like a normal industry, or being able to have interstate commerce, which really creates a barrier to entry for a lot of folks.”

But for now, at least, the industry appears to be growing in Arizona.

Marijuana sales brought in $221.3 million in taxes in 2021, according to the Arizona Department of Revenue, and sales in 2022 were on pace to eclipse that number, with $196.4 million in taxes in the first nine months of the year. That’s an average of just under $22 million in excise taxes a month for 2022.

Cultivation and production of cannabis as a crop, however, are not about to rival the 5 C’s: cattle, cotton, copper, citrus, and climate.

Alexis Villacis Aveiga, an assistant professor at the Morrison School of Agribusiness at Arizona State University, said that in order for cannabis to rival the rest of the 5 C’s, the state would need to see a much larger expansion of agricultural production.

But Arizona’s climate makes it difficult to grow cannabis, he said, and while greenhouses can help address that issue, Arizona has a lot of catching up to do with other states.

“For example, we have 35,000 square feet of indoor cannabis and hemp,” Aveiga said. “In California, there are over 4 million square feet, Colorado has over 2 million and Kentucky has around 200,000.

“So Arizona is pretty small compared to other states,” he said.

Dave DeWalt, the Arizona statistician for the U.S. Department of Agriculture, said in an email that the state had about 129,000 acres of cotton in production in 2021, worth about $156 million, and that cattle brought in $754 million that year. There were 10,031 acres of citrus in the state in 2017, the most recent year for which USDA has data available.

Acreage for cannabis production was not readily available, but the Arizona Department of Agriculture measures the production of hemp – a type of cannabis plant that contains 0.3% or less of tetrahydrocannabinol, or THC, the psychoactive component of the plant that gives users a high. Hemp cannot be used to get high but can be used to create things like rope, paper, paint, beer, medicine, and more.

The department said Arizona had 155. 5 acres of industrial hemp growing in fields at the end of 2021, and 11,558 square feet planted indoors.

Aveiga said current state regulations make hemp less attractive as a crop since farmers can only sell their harvest if it is below the 0.3% limit for THC. Otherwise, it counts as marijuana, which requires a separate license to grow and sell.

He said regulations for cannabis make it difficult for small businesses to deduct expenses and find banks to work with. That means some operators cannot take credit cards for purchases and in some cases cannot place cash in checking accounts.

“It just serves nobody’s interest to have the industry operate in cash or you do not have access to these services,” Smith said.

Despite all the current hurdles, Smith said Arizona has been a pioneering purple state in terms of cannabis regulation and has shown just how popular legalization can be.

“Cannabis is used across demographics, boomers and millennials, and Gen Z, people over 21 are using responsibly and we’re glad to see that,” Smith said. “Arizona law is by and large working well.”