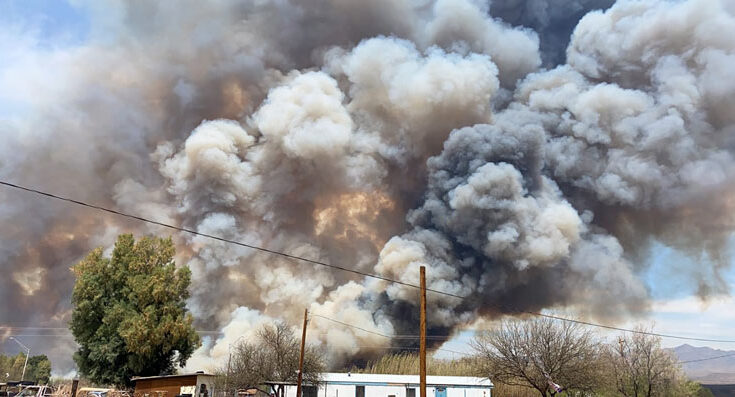 Photo By T-boyd Hinton: A wildfire in Bylas produces thick smoke that rises up behind this residence.

BYLAS – A wildfire near the Gila River in Bylas has prompted officials to evacuate some nearby residences and had inundated the Gila Valley with smoke.

The wildfire has been dubbed the “Salt Fire” and has reportedly burned more than 800 acres. There have not been any injuries, however, burned structures have been reported.

The San Carlos Apache Forest Rescue Resources Program was the initial primary firefighting agency, however, the Bureau of Land Management is also on scene along with the Fort Thomas Fire Department and Pima Fire Department.

The brush fire has grown since early in the afternoon, fed by blustery winds, and has traveled in an easterly direction toward Fort Thomas. U.S. Highway 70 was closed for a short time around 3:30 p.m. near Goodwin Wash Road in the Geronimo area but appears to have reopened.

The cause of the fire is under investigation.