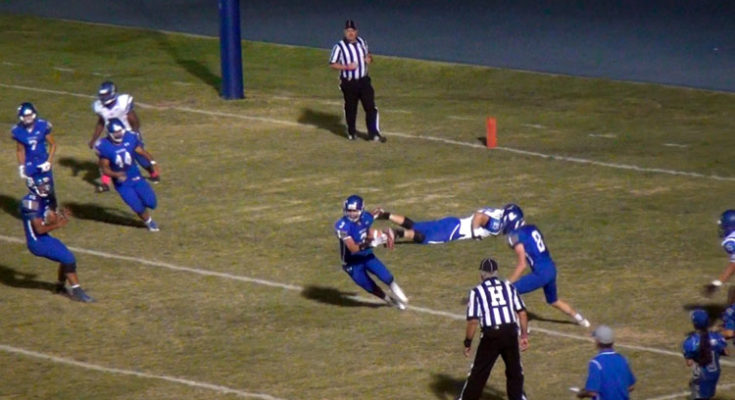 SAFFORD – The Trojans haven’t been defeated this badly since the Visigoths sacked Rome.

The resurgent Safford Bulldogs (4-2 conference, 4-3 overall) ran all over the Catalina Trojans (0-4 conference, 1-6 overall) for homecoming Friday and left with a blowout 54-0 victory for their fourth win in a row.

The Bulldogs were led on the ground by superb sophomore C.J. Scrivner, who registered 143 rushing yards on only 7 carries, according to stats registered with maxpreps.com.

After losing their first three games in close contests, the Bulldogs have been more run-centric behind quarterback Jerick Arbizo, who started the fourth game of the season for the injured Mason Duros, who was a more pass-centric quarterback.

Safford has stuck by the old saying if something isn’t broken then don’t fix it and have rallied around Arbizo at quarterback, and he has been nothing short of superb.

Arbizo scored the first two touchdowns on the night for the Bulldogs, on offense and defense.

Safford took its opening possession down the field with a big opening run by Scrivner to the 23-yard line. Aribizo then made it look effortless as he cruised into the end zone on the next play.

Catalina clapped back and pushed the ball down the field behind tough running by its tight end Taibel Crucella to give the Trojans a 1st-and-goal from the 5-yard line.

On 3rd down, however, Samuel Tobias pressured Trojan quarterback Leon Hayes and Arbizo stepped in front of a pass at the end zone and took it 100 yards the other way for the pick 6.

Safford continued to run the ball well against Catalina as Robert White peeled off a 52-yard scamper to the 5-yard line and then finished the drive with a plunge into the end zone to put the Bulldogs up 20-0, still in the first quarter.

The defense then helped the offense again as the Trojans were forced to punt deep in their own territory and the shank gave the Bulldogs the ball at the Trojans’ 20-yard line. Tobias ran it in on the next play and the Bulldogs were up 26-0 after a failed 2-point conversion.

While the stats were offense-heavy, the defense made big plays throughout the game and kept the Trojans out of the end zone in the second quarter after Catalina was set up with 1st-and-goal from the 1-yard line.

When the offense got the ball back, they marched down the field in just a few plays with big runs by Scrivner and Arbizo. Scrivner then finished the drive with a 30-yard TD run.

Safford added insult to injury as they performed an onside kick perfectly and got the ball right back.

Scrivner also finished that drive with his second touchdown on the night as he raced 33 yards to pay dirt.

The running clock then went into effect as Arbizo hit Daniel Ollick for a 15-yard TD on his only pass attempt of the night. The teams went into the break with Safford cruising to victory, 47-0.

Most of the apparent sold-out crowd left after the halftime festivities, and the Bulldogs simply tried to run out the clock in the second half, aided by the mercy rule.

The last score of the night was an exciting one, however, as a bad snap floated over the head of Trojan quarterback Tra Daniels. Backpedaling, Daniels managed to recover the ball but Matt Peralta was there to dislodge it from the quarterback. Emmett Post then gathered the fumble off the ground and took it back 44 yards to set the final score at 54-0.

Safford should have an easy time of it for its Thursday night’s game this week against the Tanque Verde Hawks (1-3 conference, 2-5 overall). The real test of the revamped offense and winning streak will be the final two games of the season as they battle the Pusch Ridge Lions (3-1 conference, 4-3 overall) and the Sabino Sabercats (4-0 conference, 5-2 overall).

Safford head coach Eric Hjalmarson did not avail himself to the media after the game. 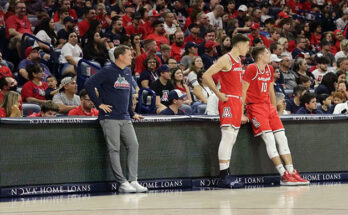 Promising future, storied past of Arizona hoops on display at Red-Blue Game 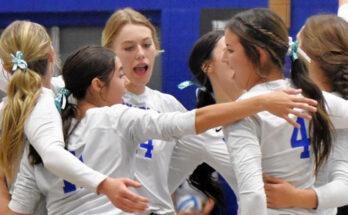 Region leading Eagles to descend on Safford on Monday 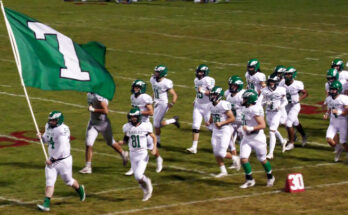