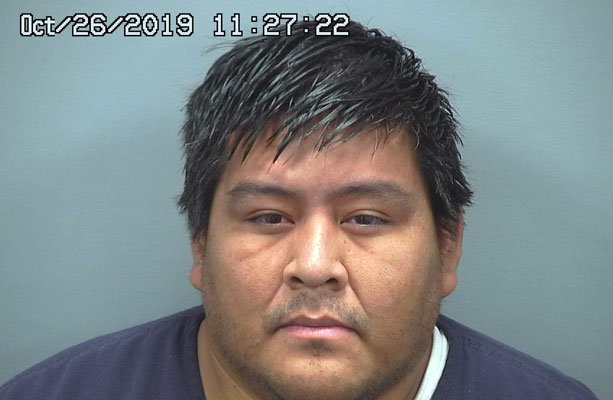 Contributed Photo/Courtesy GCSO: Asa Derek Tsosie, 31, was sentenced Wednesday to seven years in prison for a shooting incident at the Bull Pen Bar in June 2019.

SAFFORD – A man who shot up the Bull Pen Bar in June 2019 after being asked by staff to leave has been sentenced to seven years in prison.

In the early morning hours of June 24, 2019, Tsosie was requested by bar staff to leave the establishment after causing problems. Tsosie left but returned with a handgun and fired multiple shots at the bar, breaking the glass front door. Tsosie then entered the bar and fired two additional rounds. Nobody was injured in the shooting, however, it caused significant property damage and frightened employees and patrons, who fled from the gunfire and hid.

Tsosie then left the bar and temporarily escaped, setting off a police search. He was later arrested on a warrant in New Mexico and extradited and booked into the Graham County Adult Detention Facility on Oct. 26, 2019.

“This is truly a sad case and illustrates how 75 seconds of idiocy can alter the course of one’s life forever,” said Graham County Chief Deputy County Attorney L. Scott Bennett. “Neither the victims nor the defendant will ever be the same after this shooting. I believe justice was done and I hope that this will serve as a clear reminder that guns and alcohol don’t mix.”

On June 3, Tsosie pleaded no contest to four counts of aggravated assault with a deadly weapon and one count of burglary in the first degree – all Class-3 felonies – after a settlement conference with Judge Scales. The sentencing structure in the plea agreement called for a prison sentence of between five and 15 years followed by a term of probation – all left up to the discretion of the sentencing judge.

On Wednesday, Judge Scales weighed aggravators and mitigators presented by prosecutor Bennett and Tsosie’s defense attorney, Daisy Flores, respectively, and decided a seven-year sentence would be appropriate. Judge Scales cited both Tsosie’s military service as a mitigator and the terror he caused to his victims as an aggravator in his decision.

In March 2018, a jury found Salih Abdul-Haqq Zaid, 42, guilty of manslaughter for the April 26, 2017, fatal shooting of Jared Michael Garcia, 35, in the Bull Pen parking lot. Zaid was also found guilty of aggravated assault with a deadly weapon, aggravated assault, endangerment, disorderly conduct with a weapon, and unlawful discharge of a weapon within city limits.

Zaid was later sentenced to 15 years in prison by then Graham County Superior Court Judge Pro Tem D. Corey Sanders. However, The Arizona Court of Appeals recently granted Zaid’s appeal regarding a ruling during his trial for the murder and has reversed his convictions and sentences.