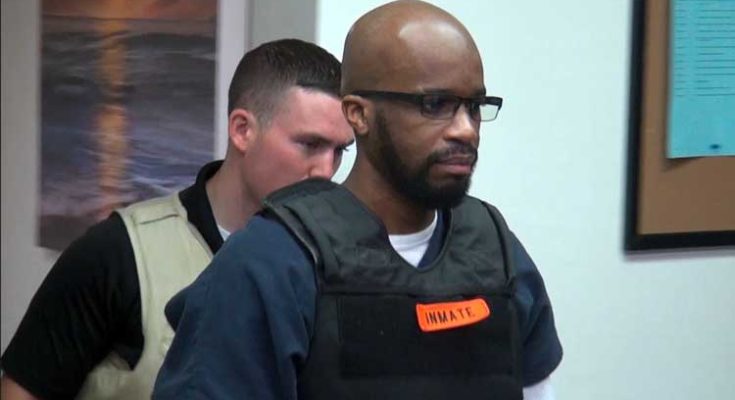 Jon Johnson File Photo/Gila Herald: Salih Abdul-Haqq Zaid stares ahead blankly after being sentenced in May 2018 for the April 2017 killing of Jared Michael Garcia. Zaid had won an appeal on his case and then accepted a plea agreement in which he agreed to serve the presumptive term for manslaughter.

Gets 4.5 years off his original sentence after successful appeal

SAFFORD – The man who shot and killed Jared Michael Garcia, 35, in the parking lot of Sarah’s Bull Pen bar on April 26, 2017, has pleaded no contest to manslaughter and has been sentenced to 10.5 years in prison.

On March 4, Graham County Superior Court Judge Pro Tem Travis Ragland sentenced Salih Abdul-Haqq Zaid to 10.5 years in prison. With being eligible for early release of one day for every seven served and having already served about four years of incarceration, Zaid could be eligible for release in 2026.

Salih Abdul-Haqq Zaid was previously found guilty of manslaughter in May 2018 and was sentenced to an aggravated term of 15 years in prison. Zaid won an appeal on his case and was set to have a new trial. However, a successful settlement conference was held, and Zaid agreed to plead to manslaughter with the caveat he be given the presumptive sentence of 10.5 years in prison. The amount of time is what he was previously offered prior to the start of his initial trial.

Zaid was originally offered a plea deal in 2018 for manslaughter that offered a range of 7 to 13 years, Zaid rejected the deal and was ultimately convicted of manslaughter and was given a sentence of 15 years. At the start of the trial, however, prosecutors advised the court that they would have settled the case if the defendant would have taken a plea deal for 7 to 10.5 years.

In June 2020, the Arizona Court of Appeals granted Zaid’s appeal regarding a ruling made by Judge Sanders on Graham County Attorney L. Scott Bennett’s motion to preclude Zaid’s attorney, Dennis McCarthy, from presenting evidence of Garcia’s prior violent acts and reputation for violence. The Gila Herald pointed out both men’s previous history of assaults in an article prior to the start of the trial (Zaid murder trial set to begin jury selection – Gila Herald March 5, 2018) and advised that Garcia’s assaults had typically been bar fights and Zaid’s assaults had been misdemeanors.

The Arizona Court of Appeals published a ruling that Judge Sanders had erred in not allowing Garcia’s history to be presented as evidence and advised the error was not harmless as it could have been used to support Zaid’s assertion of acting in self-defense.

In its ruling, the Arizona Court of Appeals also listed that Zaid could not be tried for murder in the first degree or murder in the second degree under the Double Jeopardy Clause. The Clause in the Fifth Amendment to the U.S. Constitution prohibits anyone from being prosecuted twice for substantially the same crime. The relevant part of the Fifth Amendment states, “No person shall . . . be subject for the same offense to be twice put in jeopardy of life or limb . . . . ” Since Zaid was acquitted on the murder in the first-degree charge and had a hung jury on the murder in the second-degree charge, the Arizona Court of Appeals ruled that the Double Jeopardy Clause would be in effect if the state tried to try him on either of those same charges. That means the most Zaid could get if he was not successful in his new trial was the same charge of manslaughter he was currently serving. So, even if the Graham County Attorney’s Office was again successful in Zaid’s retrial, it could only have had the maximum outcome of 15 years.

Graham County Chief Deputy County Attorney Scott R. Adams, who handled the most recent prosecution of the case said, “Once the Supreme Court left us with the manslaughter charge, we can’t look to the past and try to resolve it as if it were still a murder case. We have to resolve the case as a manslaughter case. While nothing we do can bring the victim back, the resolution brings a measure of justice, while not putting the victim’s family through another lengthy trial.”

Newly elected Graham County Attorney L. Scott Bennett, who tried the case in 2018 said, “There are times when we are disappointed in certain rulings, but our job is not to second guess, but to respect the decisions of the Supreme Court. While I really wish that once the case was remanded we could have tried the defendant for murder, we were given the manslaughter count and made sure we secured a conviction.”

After a two-week trial and nearly two full days of deliberation, a jury initially found Zaid guilty on March 20, 2018, of manslaughter, two counts of aggravated assault, endangerment, disorderly conduct with a weapon, and unlawfully discharging a weapon within city limits. The jury acquitted Zaid on a charge of murder in the first degree, and could not agree on a charge of murder in the second degree.

Former Graham County Superior Court Judge Pro Tem D. Corey Sanders came out of retirement and sentenced Zaid on May 15, 2018, on the manslaughter charge, and also gave him 10 years each on two charges of aggravated assault, 2.5 years for endangerment, 2.5 years for disorderly conduct with a weapon, and 1.5 years for unlawfully discharging a weapon within city limits. All of the sentences were deemed to run concurrent, however, so none added any time to the larger, 15-year sentence of manslaughter.

Witness testimony also advised that Zaid did not have the AK-47 in his truck when he was initially at the bar. The witnesses advised Zaid had shown them his sound system in his truck earlier and that things only turned after Zaid instigated an altercation by using a racial epithet toward the Hispanic Garcia, who reportedly responded with physical intimidation. After the incident, Zaid was told to leave by bar employees.