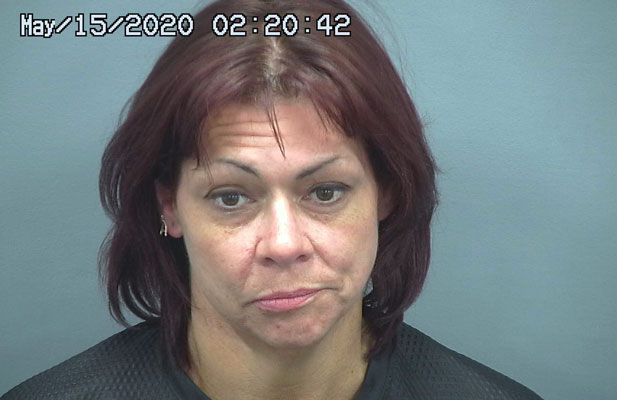 Contributed Photo/Courtesy GCSO: Rachel Laws, 46, was arrested and booked into the jail on drug charges and a warrant after being pulled over for driving at night without her taillights illuminated.

GRAHAM COUNTY – Driving without any taillights isn’t only dangerous and illegal, but for one woman led to her arrest on drug and warrant charges.

Rachel Laws, 46, was arrested and booked into the Graham County Adult Detention Facility on Friday, May 15, on charges of possession of a dangerous drug (methamphetamine), possession of marijuana, possession of drug paraphernalia, and a warrant for failing to appear in court regarding a charge of driving with a suspended license from February. Laws later pleaded guilty on May 19 to the failure to appear charge and driving on a suspended license and was given a fine. Her drug charges are still pending adjudication.

According to a Graham County Sheriff’s Office report, Laws was spotted driving across U.S. Highway 191 onto State Route 266 (Swift Trail) at about 11:21 p.m. without any functioning taillights.

Upon conducting a traffic stop, the deputy performed a records check which showed Laws’ warrant. Upon receiving permission to search the vehicle, the deputy located a bag on the front seat that held a small metal container with marijuana inside. When questioned, Laws said the bag belonged to her sister.

A further search of the vehicle resulted in locating a plastic bag in the side pocket of the door with meth inside. Laws denied knowing the meth was in her car.

The deputy then placed Laws under arrest and she was booked into the jail on the warrant as well as her new drug charges.