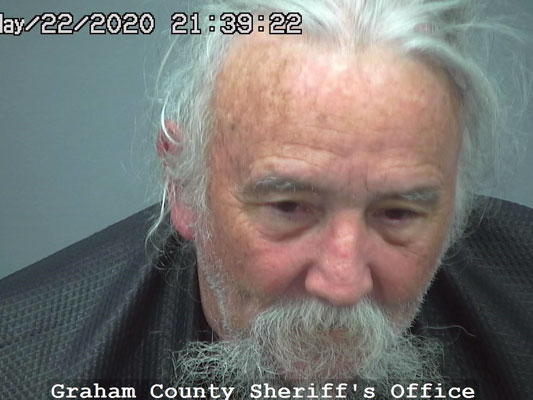 Contributed Photo/Courtesy GCSO: Thomas Hartman, 66, was arrested and booked into the jail on a disorderly conduct charge after allegedly accosting females at a local gas station.

SAFFORD – A man allegedly attempted to pick up a 5-year-old girl in a misguided attempt to proposition the older female the child was with at the Speedway gas station on Friday, May 22. The man, identified as Thomas Harry Hartman, 66, also allegedly propositioned another woman in the same store while using very loud and profane language, according to witnesses.

Officers were dispatched at about 6 p.m. to the store at 750 S. 8th Ave. regarding the initial offense. The woman who was at the store with her young nieces she was babysitting said they were getting slushy drinks when Hartman came up from behind and began to place his hands around the 5-year-old’s waist while saying, “come here baby, let me pick you up” in what appeared to be an attempt at helping the child get her desired drink. The babysitter said that was not necessary and Hartman inquired if she was married. The babysitter said she was even though she really is not to avoid further interaction, however, Hartman then inquired if she was in a happy relationship and if she would ever be in a sexual relationship with an old man, according to the police report.

The babysitter advised Hartman wouldn’t stop talking to them, so she gathered up the children and took them to the store’s restroom.

With his first prospect gone, Hartman allegedly turned his attention to another woman and asked her to perform sexual favors for him. Employees in the store advised Hartman was very loud, vulgar, and crude while making his request and that they had to stop conducting their business to get him to leave the store. Hartman located in a vehicle outside of the store and was arrested for disorderly conduct.

During the arrest, Hartman allegedly struggled with officers and was uncooperative. The report states an additional charge of resisting arrest was included, however, the jail only listed the single charge of disorderly conduct.